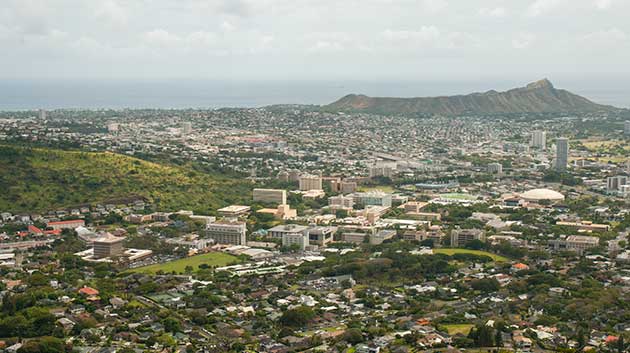 The University of Hawaiʻi at Mānoa, Kapiʻolani Community College and Honolulu Community College are located in the most livable city in the United States, according to the The Global Liveability Index 2018, an annual report by The Economist Intelligence Unit (EIU).

Honolulu was ranked 23rd out of 140 countries around the world and is the only U.S. city to score in the top 25.

The EIU assesses which cities around the world provide the best and worst living conditions. Every city is assigned a rating for more than 30 qualitative and quantitative factors across five categories: education, stability, culture and environment, healthcare and infrastructure.

Each factor in a city is rated as acceptable, tolerable, uncomfortable, undesirable or intolerable. The scores are then compiled and weighted to provide a score of 1–100, where 1 is considered intolerable and 100 is considered ideal. The liveability rating is provided both as an overall score and as a score for each category.

Honolulu scored 100 for education, 95 for stability, 88 for culture and environment, 91.7 for healthcare and 85.7 for infrastructure.

Pittsburgh was second in the U.S. and Vienna ranked number 1 worldwide.