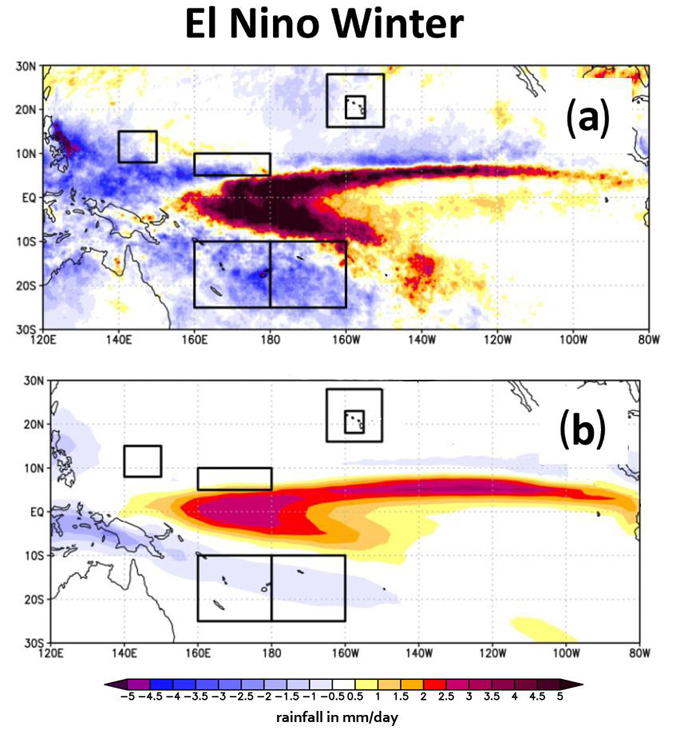 The region known as the U.S.-affiliated Pacific Islands is no stranger to variable weather and climate. One of its dominant weather influencers is the El Niño-Southern Oscillation (ENSO), an alternating pattern of abnormally warm and cool ocean temperatures in the tropical Pacific. ENSO can cause drought-like conditions in the southwest Pacific that persist for 3–4 seasons, as well as frequent cyclones and storms.

Now, a researcher from the International Pacific Research Center at the University of Hawaiʻi at Mānoa is leading a project to identify those errors. Supported by a $508,000 grant from the NOAA Research Modeling, Analysis, Predictions and Projections (MAPP) Program, Senior Researcher H. Annamalai and his team will develop tools, known as diagnostics, to pinpoint where and how errors begin, to help scientists determine how to improve their models.

Just like a doctor diagnosing why a patient is feeling unwell, these tools will help climate modelers determine why their models are not performing well.

“Our diagnostics will be user accessible, flexible and adaptable such that they can be transitioned to any group of evaluations during model development,” said Annamalai.

Annamalai’s research will build on results from his MAPP-funded project that is ending this year. That project focused on understanding processes that shape unusual ENSO-related precipitation during the winter season, using diagnostics.

He and his team found that model errors in predicting abnormal precipitation are strongly tied to the models’ ability to represent how moisture is distributed in a certain part of the atmosphere and how the interaction between radiation and clouds are represented. This new project’s diagnostics will address those model errors in representing moisture, clouds and their interaction with radiation in the atmosphere.

Specific project outcomes will include a set of metrics that will help scientists quantify how accurately their models represent ENSO-related impacts and identify sources of model errors that reveal deficiencies to help inform model improvement decisions.