Kapiʻolani Community College won the inaugural University of Hawaiʻi Culinary Institute of the Pacific Brewing Future Minds Statewide Competition and the $9,000 first prize–$5,000 for the school and $2,000 for each of the two student chefs on the team. Four teams from UH community colleges competed in the event sponsored by Stella Artois, Hawaiʻi Food and Wine Festival and Kauaʻi Shrimp and held at the UH Culinary Institute of the Pacific (CIP) on Diamond Head.

“It’s exciting to see that all these chefs are here to try what we are making,” said Martin referring to the famous judges. “It means that they support what we are doing, so it’s nice.”

The celebrity judges were just one element of the competition. The CIP kitchen was packed with student chefs, judges and other guests who were able to enjoy the dishes as soon as they were prepared and plated before their eyes.

“I would say it’s a little stressful, but it’s also very satisfying to be able to see right away their face, while trying it,” said Martin. “I think it is a really cool concept.”

Wong, a graduate of the Kapiʻolani CC culinary program, says competition is a great experience for the students.

“All the culinary schools get their students together and compete, they’re like striving,” said Wong. “I think that’s the most important thing. The bonus is the food taste great!”

Kapiʻolani CC Chef Instructor Jason Peel, the instructor for the winning team, helped organize the competition. He says his goal is to get all of the UH culinary programs to compete.

“The biggest thing I want to see is getting the state together, getting the schools and start building this camaraderie,” said Peel.

“I was pleased with every dish,” said Wong who raved about the students and instructors before thanking the sponsors. “They create funds for competition like this, which raises the bar for all culinary campuses, for the future of the industry and the future chefs of Hawaiʻi.”

Speaking of future chefs, The winning team from Kapiʻolani CC will be featured at the Hawaiʻi Food and Wine Festival’s Winederland event at the Hawaiʻi Convention Center on Friday, October 26, 2018. 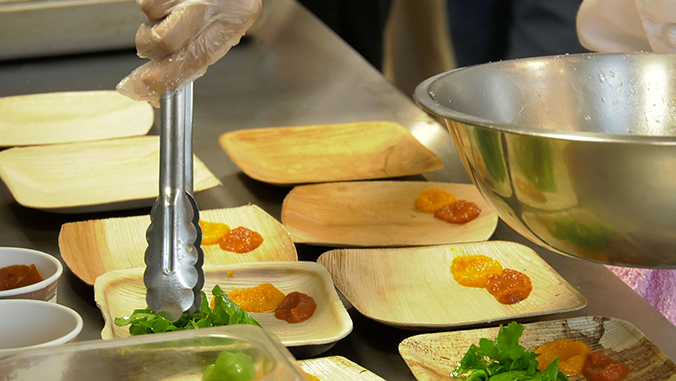