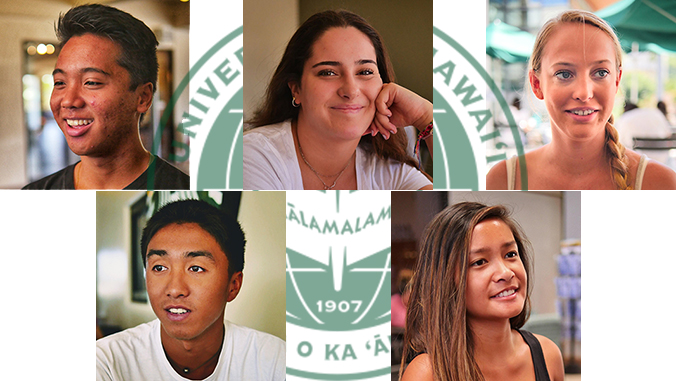 The University of Hawaiʻi at Mānoa welcomed 2,209 first-time freshmen to campus in fall 2018, an increased 12.8 percent from the previous fall semester, and the largest freshman class in the universityʻs 111-year history.

“The main factor driving me to go to UH Mānoa was cost. I got a scholarship so Iʻm basically paying $2,000 a semester over here. Being at UH Mānoa and having that family bond with people Iʻve come to know throughout the years of my life and sharing that college experience with them, itʻs pretty cool.”

“I applied to other schools like Creighton, [Grand Canyon University] and University of Portland and I decided to stay here to help with costs with my parents but also because I have a network with so many people already, I can just build upon that network and further my future career.”

“I love the location and I also like that UH Mānoa has a variety of majors. Iʻm in psychology right now but Iʻm also not super decided. So I like that [UH Mānoa] has good programs for every major. I was also given a good financial aid package, which definitely helped me decide.”

“I had a friend whose brother went here and he really talked it up. When I visited I really enjoyed the campus and the community around here. So out of all the places I got into, I felt like UH Mānoa was the best choice for me.”

“It was a dream I had as a little kid. Every year we would visit family out here and I would always say I wanted to go to school in Hawaiʻi. I used to run in high school so a bunch of other schools reached out to me to run at their college, but I chose here because I could be closer to my family.”

“So I have family over here and I liked the medical school here so it made sense to enroll within UH itself and just go from undergraduate to graduate school. I applied to [New York University] and other schools.”

There are several factors that can be attributed to the successful enrollment at UH Mānoa, including heightened strategic recruitment efforts that included increased outreach within high school campuses, locally and abroad, an aggressive communication plan that involved not only the student, but the parent and counselor, an automatic merit-based scholarship to assist incoming students who qualify, and a new branding and marketing strategy that targeted specific populations including local, international and transfer students.

Read more about UH Mānoa’s successful recruitment efforts and the overall 2018 enrollment at the 10 UH campuses.