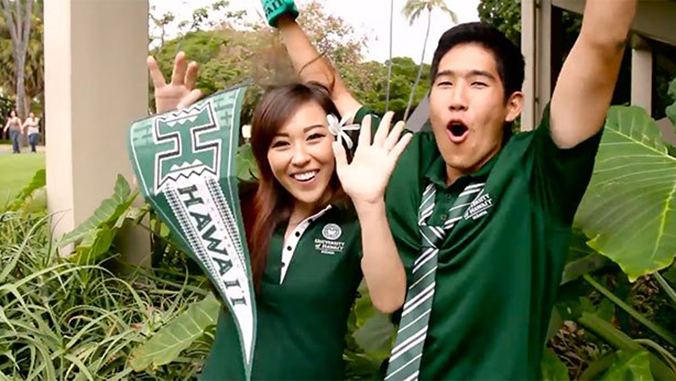 The University of Hawaiʻi at Mānoa welcomed 2,209 first-time freshmen to campus in fall 2018, an increased 12.8 percent from the previous fall semester, and the largest freshman class in the universityʻs 111-year history. With more than 14,211 applications received, this enrolled freshmen class breaks a record set just two years prior as the Office of Admissions stepped up its efforts to recruit locally and nationally while the schoolʻs four-year graduation rate (34 percent) continues its steady climb.

“Over the past few years, many new initiatives and strategies have been put in place to address the enrollment needs of our institution. We have invested a lot of time and effort into these new programs, as this has been a top priority,” stated Assistant Vice Chancellor of Enrollment Management and Director of Admissions Roxie Shabazz.

This was the largest resident freshman class at 60.9 percent residents, where 72.9 percent attended a public high school and 27 percent from a private institution. Of the incoming class, 25.4 percent of this incoming class is in the top 10 percent of their graduating class. That is an almost 2 percent increase from fall 2017, and 52.4 percent who were ranked in the top quartile of their graduating class.

The New Warrior Scholarships, comprised of the Chancellor’s, Regents, Mānoa Excellence and Mānoa International Excellence Scholarship, saw an increase of 63.8 percent in applications from the previous fall 2017, an indication that more high-achieving students are applying to UH Mānoa.

“We are very pleased with our incoming class. To see eager, motivated, top-knotch students from different, diverse backgrounds, wanting to complete their education here, adds to the overall student and campus experience at Manoa. Our teams have been hard at work to achieve these enrollment goals,” stated Shabazz.

There are several factors that can be attributed to the successful enrollment at UH Mānoa, including heightened strategic recruitment efforts that included increased outreach within high school campuses, locally and abroad, an aggressive communication plan that involved not only the student, but the parent and counselor, an automatic merit-based scholarship to assist incoming students who qualify, and a new branding and marketing strategy that targeted specific populations including local, international and transfer students.

Other engagement and recruitment endeavors included the Mānoa Experience, which had a record attendance in 2018, a radio campaign, increased application days at 24 Hawaiʻi high schools and a workshop that drew about 150 high school counselors from across the state.

Among the enrolled freshmen class, mixed ethnicity remained the largest ethnic group enrolled at 27.1 percent, with Caucasian at 23.1 percent and Hawaiian/Part-Hawaiian at 12.8 percent. Further breakdown of ethnic groups included Filipino at 11.8 percent, Chinese at 7.4 percent, Japanese at 7 percent, Korean at 2.4 percent. Students who did not report a race or ethnicity made up the remainder of admitted students.