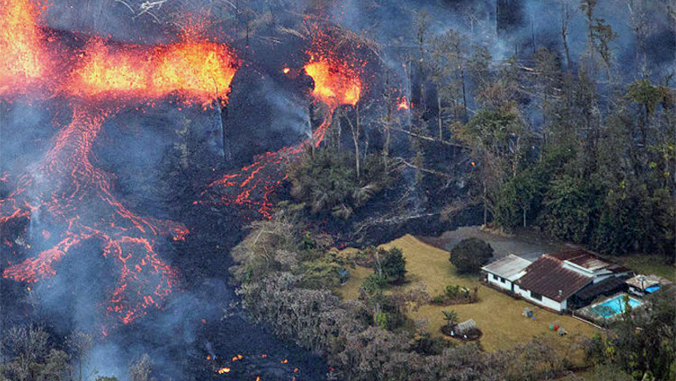 A University of Hawaiʻi at Mānoa survey of farmers, ranchers and other agricultural producers on Hawaiʻi Island by the College of Tropical Agriculture and Human Resources (CTAHR) shows that recent eruptions of Kīlauea’s east rift zone have caused almost $28 million in damage.

CTAHR agricultural economist Matthew Loke surveyed the damage. He found while the damage was severe, farmers are determined to bring back their crops.

“A majority of ag producers with farms destroyed are eager to start over again,” said Loke. “They are seeking needed resources to restore their livelihood and return to their passion for farming.”

Loke, a CTAHR faculty member in the Department of Natural Resources and Environmental Management and the Hawaiʻi Department of Agriculture’s Agricultural Development Division, conducted the survey to gauge losses sustained from the eruptions at the request of the Hawaii Floriculture and Nursery Association (HFNA) and CTAHR Interim Associate Dean for Extension Kelvin Sewake.

Responses to the survey, which was distributed by UH Mānoa’s CTAHR extension and HFNA members agents in early August, showed that at least 46 farms had been affected by the lava. The eruption displaced more than 1,337 acres of arable land on Hawaiʻi Island, for total reported farm losses of $27.9 million. These losses included crops (61 percent), land, building structures, inventory and equipment. Respondents included cacao and ʻulu farmers, macadamia and orchid growers and other producers. The agricultural industries with the highest reported losses were floriculture and nurseries, at $13.3 million, and papayas at $6.5 million. A minority of the producers had crop insurance.

Of the respondents, 52 percent reported owning their farm lands, while the remainder leased or rented. Most survey respondents did not live on their farm lands, so loss of livelihood was not necessarily coupled with loss of living situation. Most do not plan to replant or put the affected acreage to other use, though a large majority (87 percent) of the producers whose farms were destroyed are willing to relocate and start over on new land.

While the majority of the producers had access to housing, food, water, clothing and toiletries after the disaster, 63 percent said they were in need of information about applying for public assistance, including disaster unemployment assistance, financial assistance and health insurance. The survey results will be used by HFNA to seek federal, state and county government assistance for the affected farmers and to help them return to farming as soon as possible.

“Hawaiʻi agriculture has had a rough year, with torrential rains, volcanic eruptions and hurricanes,” said CTAHR Dean Nicholas Comerford. “The college is working hand-in-hand with the Hawaiʻi Department of Agriculture and the agricultural industry to provide any and all support that we can through our cooperative extension program, including growing seed to help re-establish the industries that were hurt.”