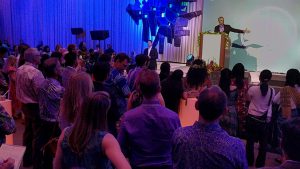 The Obama Foundation convened 21 future leaders from 16 countries and territories across the Asia-Pacific region in a workshop at the East-West Center adjacent to the University of Hawaiʻi at Mānoa campus in January. Former President Barack Obama joined the participants for part of the workshop and also addressed the emerging leaders in a private reception attended by local community and civic leaders including UH President David Lassner and East-West Center President Richard Vuylsteke.

“I am very glad that we could bring the Obama Foundation programming here to Hawaiʻi and we are grateful to be partnering with the University of Hawaiʻi, which as some of you know has been pretty important to my family over the years. Basically I wouldn’t exist were it not for the University of Hawaiʻi,” Obama said, generating laughter. His mother and father met at UH Mānoa.

He added that he was grateful to be working with Lassner, Vuylsteke and members of the two institutions they head.

The Obama Foundation utilized the workshop to hear from the emerging regional leaders and to design a future Asia-Pacific Leaders program.

“As we launch this program, Hawaiʻi is going to be indispensable,” Obama said. “Itʻs going to be a key platform for us—a convening space, a resource and an example of the kind of community-based solutions that we aim to promote.”

Obama said last summer the foundation brought together 200 leaders from across the continent of Africa who are now working with each other to develop regional solutions. The foundation is working to do the same in the Asia-Pacific region, Latin American and North America and to build a global network of leaders, using a values-based approach to leadership development.

“I could not be more excited about the work we are going to do. I am eager to see everything that you are going to accomplish in the future,” Obama said. “I thank the community of Hawaiʻi for, as always, being such exemplary hosts. And Iʻm confident that with the great team we are building and the amazing partnerships that all of you represent, that we are going to once again change the world for the better.”

Said Lassner, “This an important milestone, the first, official Hawaiʻi-based event of the Obama Foundation. Part of the legacy that President Obama hopes to establish with his foundation—reaching out, developing young leaders globally and, in particular, the Asia-Pacific region and he has made it clear that the University of Hawaiʻi, and the state of Hawaiʻi, has an important role to play in this noble effort.”

Although UH and the East-West Center are separate institutions, they have long been close partners and neighbors.