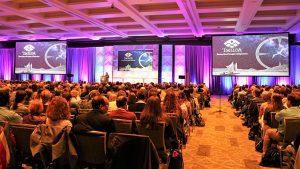 The program out of ʻImiloa Astronomy Center of Hawaiʻi at the University of Hawaiʻi at Hilo that provides Hawaiian names to astronomical discoveries was the focus of the opening session of the 223rd meeting of the American Astronomical Society (AAS) in Seattle, Washington, on January 7, 2019.

ʻImiloa Executive Director Kaʻiu Kimura gave the keynote address at the opening event to an audience of more than 2,000 attendees on ʻImiloa and it’s mission, ʻImiloa’s A Hua He Inoa program where Hawaiian speaking students work with Hawaiian educators and Hawaiʻi-based astronomers on naming astronomical discoveries and story behind the naming of ʻOumuamua, the first interstellar object to be tracked through our solar system.

“I think I got the audience thinking differently about culture and science partnerships,” said Kimura. “It was such an honor to share the new initiatives forming back in Hawaiʻi that have had—and have yet to have—tremendous impact for our communities.”

ʻOumuamua gained massive media attention and propelled the use of ʻolelo Hawaiʻi as part of the coverage. Larry Kimura of the UH Hilo Ka Haka ʻUla o Keʻelikolani College of Hawaiian Language named the interstellar object. The A Hua He Inoa program is the first of its kind in the world that weaves traditional indigenous practices into the process of officially naming astronomical discoveries. The Hawaiian speaking students in the program have named two asteroids in the solar system, Kamoʻoalewa and Kaʻepaokaʻawela.

AAS is the major organization of professional astronomers in North America with a stated mission to enhance and share humanity’s scientific understanding of the universe.