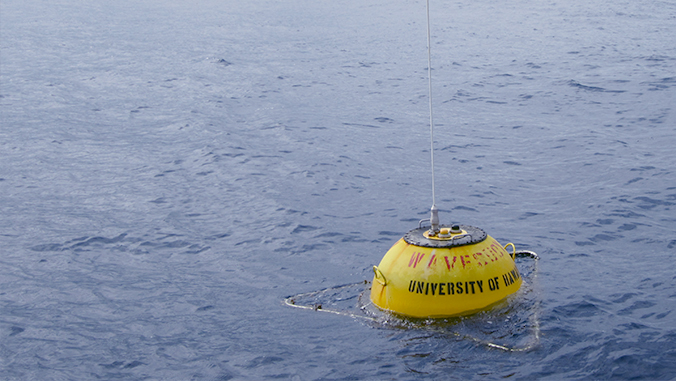 The University of Hawaiʻi at Mānoa School of Ocean and Earth Science and Technology (SOEST) was awarded $1.3 million from the U.S. Department of Energy (DOE) to support a project that focuses on advancing marine energy devices. During the three-year innovative project, the team of researchers and engineers led by the Hawaiʻi Natural Energy Institute (HNEI) will develop a wave-energy converter concept culminating in a set of tests in a sophisticated mainland wave tank.

“Advancing next-generation marine energy will help the U.S. ensure a secure, reliable, and enduring supply of American energy,” said Under Secretary of Energy Mark Menezes. “These early-stage research and development projects are key to the development of water power as part of DOE’s ‘all-of-the-above’ energy strategy.”

The concept, the Wave Focusing Energy Converter, is based on the idea that a submerged disk with an opening at the center will focus wave energy and create concentrated flow through that opening. By placing the device near the surface, and making various shape changes away from a simple disk, the team can alter that flow through the opening such that it moves in one direction only—allowing a conventional hydro turbine to be used to produce energy.

“Our calculations suggest that this can be a power-generation methodology that produces encouragingly low-cost electricity,” said Patrick Cross, HNEI researcher and lead on the project. “To date, wave-energy conversion is still in the category of very early stage research and development, and costs remain quite high. We feel we have an approach that can lead to lowering costs–through high-conversion efficiency and relatively low, up-front costs–as compared to technologies under development elsewhere.”

The origin of the concept was graduate school research conducted by Richard Carter, who completed his doctoral degree in SOEST‘s Department of Ocean Resources Engineering (ORE). Carter continued to develop the concept as an independent researcher, and joined forces with several experts from UH and ORE to inject additional practical and theoretical insights to mature the concept further.

“This project can be seen as one of many that are building toward Hawaiʻi’s renewable energy goals,” said Cross. “Wave energy is likely years away from true commercial viability in terms of grid-scale power production, but other non-grid applications of wave energy may be much more achievable in the near term, and given that the wave energy resource around Hawaiʻi is excellent, it’s important that we at UH add our talents to the advancement of this emerging field. In concert with our many contributions to Navy and DOE objectives at the Wave Energy Test Site, selection for this award by DOE allows us to take an important additional step toward wave energy advancement at UH Mānoa and HNEI.”

Additional investigators and partners on the project are affiliated with the UH Mānoa Department of Physics, the National Renewable Energy Lab and Honolulu-based Sea Engineering, Inc.