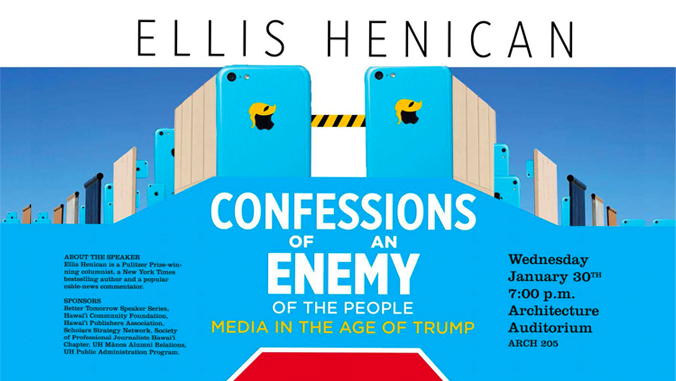 The University of Hawaiʻi at Mānoa Better Tomorrow Speaker Series presents a free public lecture, “Confessions of an Enemy of the People: Media in the Age of Trump,” by Pulitzer Prize-winning journalist Ellis Henican, Wednesday, January 30 at 7 p.m. in the UH Mānoa Architecture Auditorium.

Henican is a New York Times bestselling author and a popular cable-news pundit. He is also the voice of Stormy on the hit Cartoon Network series Sealab 2021. His dozen books include TRUMPITUDE: The Secret Confessions of Donald’s Brain.

Henican is a regular commentator on national talk and news shows. As a longtime political correspondent, he offers an inside view of the changing news media and its contentious relationship with the Trump White House.

He is prepared to speak about the ongoing government shutdown and prospects for resolution, on the political impasse over immigration reform and the border wall, on the administration’s prospects in a divided government and even on Congresswoman Tulsi Gabbard’s presidential prospects.