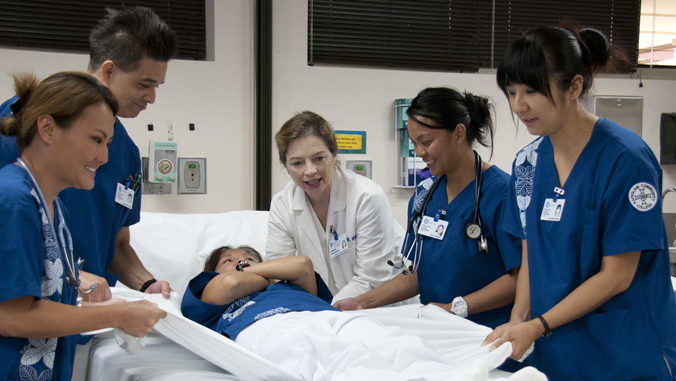 Students from Kapiʻolani Community College’s associate degree in nursing program can proudly say their nursing department is among the best in the nation.

According to the Mountain Measurement NCLEX Program Report for April–September 2018, which is published by the National Council of State Boards of Nursing, students from 1,076 associate degree in nursing programs nationwide took the National Licensure Examination (NCLEX–RN). The NCLEX–RN is required to receive a registered nurse license. All of Kapiʻolani CC’s associate degree in nursing graduates passed the exam as first-time candidates. Of the 1,076 programs taking the NCLEX–RN during this period, 137 programs, or only 13 percent of all programs in the nation received a 100 percent pass rate.

Toni Choy, nurse-instructor at Kapiʻolani CC said, “Of all the four-year and two-year nursing programs in the United States, KCC was (among) the best in the nation with all of the 2018 graduates passing the (NCLEX) RN licensing exam on their first try. They even beat out most of the four-year nursing programs throughout the United States and Hawaiʻi.”