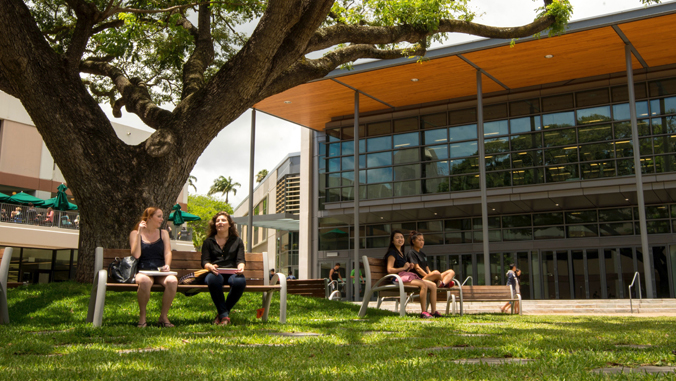 The University of Hawaiʻi received two grants from the American Cancer Society and the Hawaiʻi State Department of Health totaling nearly $40,000 to support its tobacco-free campus efforts to provide a healthy environment for all students, faculty and staff. The American Cancer Society awarded UH Mānoa a $20,000 Tobacco-free Generation Campus Initiative grant to encourage students to stop tobacco use, including e-cigarettes and vape products. The Hawaiʻi State Department of Health provided a $19,300 grant to support UH’s implementation of its system-wide tobacco-free campus initiative.

Grant funds will be used to develop messaging and disseminating educational initiatives to the UH community about the UH tobacco-free law. The law prohibits tobacco products—electronic cigarettes and vapes as well as cigarettes, cigars, pipes and all forms of smoking and chewing tobacco—on all campuses and properties including what may have been previously designated smoking areas.

“We are extremely grateful to the American Cancer Society and the State Department of Health for these grants, which will be a huge boost to the momentum of the UH Tobacco Control Task Force,” said UH President David Lassner. “With nicotine use and addiction becoming a growing health concern among adolescents and young adults, as well as affecting others on campus, these grants will notably elevate the health of the UH ʻohana.”

As part of the two grants, the University Health Services Health Promotion Program in conjunction with a UH Tobacco Control Task Force reviews details of the state law as it pertains to the UH Tobacco-Free policy and will track dissemination of its information, as well as evaluate project reach and impact.

The tobacco-free UH law was passed during the 2018 legislative session as the result of collaborative efforts by the American Cancer Society Cancer Action Network, the Hawaiʻi State Department of Health, and community advocates, including UH student organizations. The Student Health Advisory Council (SHAC) has been a strong advocate working for a tobacco-free system.

SHAC officer Kate Magno stated, “We have supported a few different tobacco-free bills, starting with the T21 law, which raised the legal age of tobacco use in Hawaiʻi from 18 to 21. Finally, we get to today where SHAC and many other organizations pushed for a tobacco-free UH system.”

Added SHAC member Ruthie Diaz, “We care deeply about everyone’s health, so we pushed to move these bills into law to protect youth from becoming addicted to tobacco products.”

Chelsea Gonzales, a student at UH Mānoa and the president of a registered independent organization on campus called Breathe Aloha was also actively involved in the passage of the tobacco-free UH law. “Breathe Aloha Club wants to make sure that our peers can avoid addiction to tobacco products and also protect the rights of everyone on campus who want to avoid the dangers of secondhand smoke. We all deserve a healthy place to live, work, and learn.”