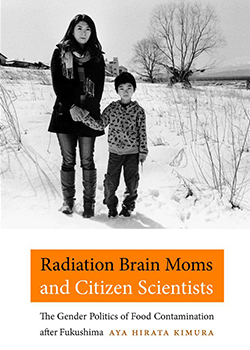 Radiation Brain Moms and Citizen Scientists: The Gender Politics of Food Contamination after Fukushima by Aya H. Kimura, associate professor in the sociology department in the College of Social Sciences at the University of Hawaiʻi at Mānoa, has received the 2019 Rachel Carson Book Prize. The book was recognized for its contributions in the field of science and technology studies, overall scholarly quality and social and political relevance.

Radiation Brain Moms and Citizen Scientists explores the plight of Japan citizens in the aftermath of the 2011 Fukushima Daiichi Nuclear Power Plant disaster. Concerned about the safety of the nation’s food supplies, and skeptical of the government’s assurances of safety, these individuals, particularly mothers, began collecting scientific data on radiation-contaminated foods.

Rather than praise, the work of these citizen scientists was dismissed as the work of irrational women who lacked scientific knowledge. Characterized as rumormongers, they faced many social sanctions and challenges as they worked to secure the health and safety of their communities in a nation where their actions defied traditional gender roles.

In awarding Kimura with the Rachel Carson Book Prize, the Society for Social Studies of Science (4S) recognized the vast reach of her work. “It is a thorough portrait of the realities of life in post-Fukushima Japan, as well as a thoughtful, insightful reflection upon the challenges faced by the nation’s citizen scientists,” stated 4S.

“Radiation Brain Moms and Citizen Scientists deals with questions on the relationships between gender, technoscience and activism,” said Kimura. “But it is also borne out of pressing questions that my family members and friends were grappling with in their daily lives and sometimes asked me in emails and Skype calls as the Fukushima nuclear accident unfolded. ‘The authorities said the situation was under control but what should we do?’”

Kimura continues, “Radiation Brain Moms and Citizen Scientists describes how citizens had to resort to voluntary monitoring. These individuals, predominantly women, were harshly critiqued as irrational and over-reacting when they expressed concerns, and those concerns were refashioned as the cause for the health impacts of the nuclear accident. The book also tells a difficult story of how citizen monitoring can be both empowering and restricting.”