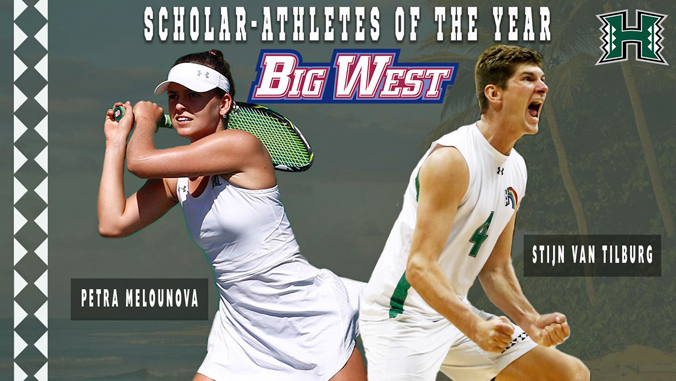 Senior men’s volleyball player Stijn van Tilburg and senior women’s tennis player Petra Melounova will be honored as the University of Hawaiʻi’s recipients of the Big West Scholar-Athlete of the Year Award. One male and one female student-athlete from each of the nine conference schools will be honored at a special banquet on March 14 at the Marriott Suites hotel in Garden Grove, California.

Van Tilburg, an outside hitter for the Rainbow Warriors men’s volleyball team, earned first-team All Big West honors in 2018 as well as American Volleyball Coaches Association All American honors. An economics major with a minor in political science, van Tilburg has earned dean’s list honors for six semesters, earning a perfect 4.0 in four semesters.

In the midst of her junior season with the Rainbow Wahine tennis program, Melounova is already one of the most successful players in program history. She is a two-time Big West Conference Player of the Year. An electrical engineering major, Melounova is scheduled to graduate in spring 2020.

For more on van Tilburg and Melounova, go to the full story on the UH Mānoa athletics website.