“Bravo!” shouted the crowd in the Neal S. Blaisdell Centerʻs Concert Hall, as they applauded and rose to their feet.

They were the fortunate witnesses of the March 28, 2019 world premiere of Raise Hawaiki, a once-in-a-lifetime opportunity to experience a collaborative artistic interpretation of the Polynesian Voyaging Society’s Mālama Honua worldwide voyage, composed by the University of Hawaiʻi at Mānoa’s award-winning Michael-Thomas Foumai.

Inspired by story of the voyaging canoe Hōkūleʻa, the large-scale symphonic work brought together Hawaiʻi’s major institutions of performance, learning and voyaging, mirroring Hōkūleʻa’s voyages that bring communities together across the planet to embrace and care for their culture and natural environments.

The event featured a cast of a thousand, including 200 musicians and singers, hula choreographed by Lauren Kanoelani Chang Williams, with projection visuals from the Polynesian Voyaging Society and ʻŌiwiTV, historical photos by Sam Low and Ben Young, artwork by Herbert Kāne and voyager Hana Yoshihata, and a pre-show performance from IONA Contemporary Dance Theatre.

See what composer Michael-Thomas Foumai had to say about Raise Hawaiki. 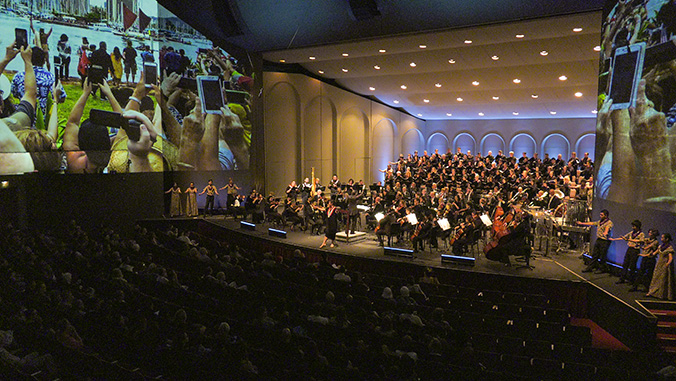