The Rainbow Wahine won both ends of Saturday’s doubleheader winning 3–1 and 5–2 to complete the sweep, claiming the top spot in the Big West with an 8–1 record. 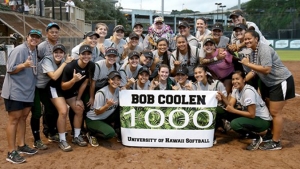 Coolen’s record at UH Mānoa is now 1,000–608–1. Overall as a head coach, Coolen has a record of 1,072–701–1 when combining his five year record at Bentley College with his UH Mānoa head coaching career.