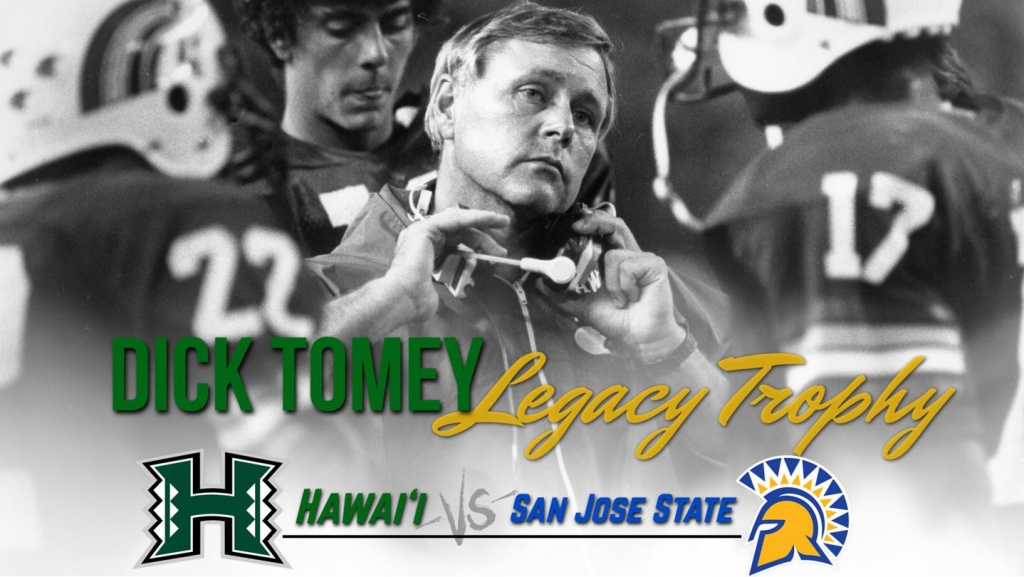 The University of Hawaiʻi and San Jose State University will play for a new trophy to honor the late football Coach Dick Tomey.

Tomey put Hawaiʻi football on the NCAA Division I map and later revitalized and energized San Jose State University’s program. The schools will play for the Dick Tomey Legacy Trophy for the first time on November 9, 2019, at Aloha Stadium.

The concept of honoring Tomey was a collaboration first conceived in a conversation between Head Coaches Nick Rolovich of UH and Brent Brennan of San Jose State. Athletics Directors David Matlin of the Rainbow Warriors and Marie Tuite of the Spartans approved the concept.

“If there was anyone deserving of having a legacy trophy named after him, Dick Tomey is the one because of what he meant to the game of football,” Rolovich said. “I’ve had the privilege to coach with him and being mentored by him for many years and he is responsible for me being able to sit in this chair. It is only appropriate that both Hawaiʻi and San Jose State programs honor him in this way.”

“Coach Tomey was an inspirational leader and kind warrior,” said Hawaiʻi Athletics Director David Matlin. “I was blessed to call him a mentor and a friend. This legacy trophy memorializes the impact he had on so many people in both Honolulu and San Jose.”

Tomey died of lung cancer in May.

In addition to the new trophy, the Dick Tomey Legacy Fund has been established through the Positive Coaching Alliance (501c3), which provides scholarships and programming for underserved youth in Arizona, Hawaiʻi and the San Francisco Bay Area.

Read more about the new trophy and the collaborative effort on Hawaiʻi Athletics.