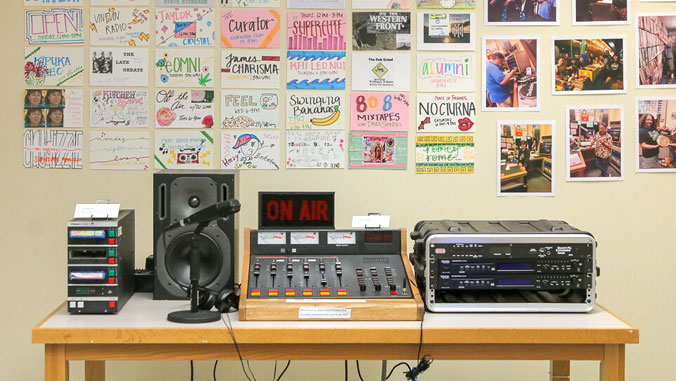 Hawaiʻi‘s first entirely student-operated radio station KTUH at the University of Hawaiʻi at Mānoa marks its 50th anniversary as an FM station in July 2019. To commemorate its anniversary year and this special time in KTUH history, an exhibition of archival photos, equipment and materials is on display at the Hamilton Library’s Bridge Gallery through July 12.

The exhibit shows the struggle to establish KTUH, formerly known as KUOH, up to its current incarnation as an award-winning college radio station. A closing reception will be held at the library on Friday, July 12, at 4:30 p.m.

“The exhibit showcases everything great about KTUH, from past to present,“ said Marc Ito, KTUH events director. “Everyone is excited about turning 50 years old and proud to be a part of this college radio station’s existence.”

A look back, celebrating anniversary

Milestones in its 50-year history include:

Looking to the future

Under the helm of KTUH General Manager Smee Wong and Program Director Bjarne Bartlett, the radio station is excited to continue a tradition of innovation and has big plans for its anniversary year.

A weekly campus concert series featuring local musicians and KTUH staff will be held Fridays in September at Mānoa Gardens, as well as a grand finale celebration in October. This year, the station released a new podcast, KTUH Online, to help grow its online content and continue to serve as a platform for student voices on campus.

“KTUH offers a platform for college students to connect with the community, a place that our voices could be heard loud and clear,” said Wong. “(After) 50 years of broadcasting, we keep growing, innovating and creating educational content and aim to push boundaries to make our island an even better place. We look forward to the next 50 years!”

Check out more photos from the KTUH 50th anniversary exhibit.