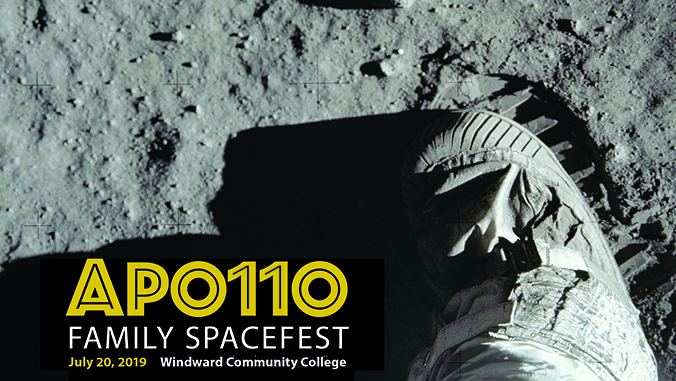 There will be hands-on science fun (for all ages) at the Aerospace Exploration Lab, space-face painting and photo booth with space props.

Many Small Steps, a 50th anniversary NASA exhibit, outlines the steps that led to the first human landing on the moon, from early space flight to Apollo to the future of space exploration, as well as 3D models of the Apollo spacecraft and other space-related items. The State Archives will provide Apollo 11 and Apollo 17 moon rocks and two Hawaiian flags that were placed on the lunar surface by the Apollo astronauts, then brought back to Earth and gifted to the people of Hawaiʻi. The Royal Hawaiian Guard will stand honor guard by these artifacts. Open from 10 a.m. to 4 p.m.

Astronaut: 11 a.m. and 2 p.m.
Find out what it takes to be an astronaut! Explore inner and outer space as you experience a rocket launch from an astronaut’s point of view and float around the International Space Station in microgravity. Narrated by Ewan McGregor.

Back to the Moon: 12 p.m. and 3 p.m.
Beginning in the late 1960s and early 1970s, we see what that era of landers and orbiters taught us about our nearest neighbor. And who will win the Google Lunar XPRIZE? We are taken through a successful launch, landing and lunar surface travel, ending with a stunning glimpse of a plausible scenario for our future on the Moon. Narrated by Tim Allen.

Dawn of the Space Age: 1 p.m.
Relive the excitement of the early days of space exploration, from the launch of the first artificial satellite to the magnificent lunar landings and privately operated space flights. Who were these men and women that took part in these death-defying endeavors? Witness their drive, passion and perseverance to explore.

Music will be performed by the Pacific Fleet Band–Harbor Brass Quintet. Food can be purchased from The Hub (Windward CC’s coffee shop in the library) and Waimānalo Country Farms.

This event is co-sponsored by Hawaiʻi State Archives and Hawaiʻi State Library. For more information, contact Imaginarium Manager Dineene O’Connor at (808) 235-7350 or dineene@hawaii.edu.