Students of the Academy for Creative Media (ACM) at the University of Hawaiʻi at Mānoa participated in the ACM SMART Exchange program in June in Shanghai, China. During the filmmaking workshops, five ACM students along with Shanghai University’s Shanghai Film Academy (SFA) students got hands on and co-produced two short films.

“I am so grateful that I was able to take part in this year’s SMART exchange. Being able to connect with others from a different culture through the shared interest of filmmaking was a very insightful and humbling experience,” said Smith. “The best part of the trip for me was meeting the students from Shanghai University and being able to cultivate new friendships with them as we worked together on various projects.”

Skirt is about a young businesswoman, with no time for anyone, who catches a young girl stealing from a clothing shop. As she tries to teach the girl a lesson, she ends up on a journey of her own. Along the way she is taught something of great value.

Flute opens in Shanghai in the 1940s when an American boy asks his friend, a Chinese girl, to safeguard a treasured flute as he leaves the country. In the present, a writer comes to Shanghai in search of inspiration and encounters this magical flute.

The SMART Exchange was one of the greatest experiences of my life.
—ACM student Lawrence DiBlasio

“The SMART Exchange was one of the most engaging experiences I’ve had at UH Mānoa,” said ACM student Adam Denis, a filmmaker on Flute. “I learned how to work with a co-production crew and worked with amazing people. The time that I had there was informative in enhancing my worldview and developing skills related to my degree. Overall, it was a great experience and I would recommend it to anyone interested!”

The students worked on some of the preproduction before the exchange and collaborated on filming in Shanghai. Post-production (editing and sound) is currently in progress.

Lawrence DiBlasio, ACM student and actor in Flute, said, “The SMART Exchange was one of the greatest experiences of my life. The faculty and students at Shanghai University were truly kind, compassionate and talented filmmakers. The collaboration between the universities and countries warmed my heart. I was honored and humbled to be invited to such an amazing program.”

This year’s program is made possible in part by the Hawaiʻi International Film Festival, Ito En, OSG, and with travel support by ACM System. 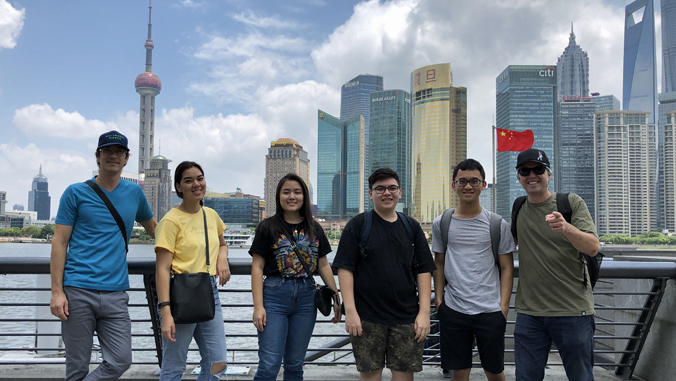