A former teen mother and recovering addict. A young man who thought his lifetime work would be bagging groceries. A Niʻihau native with a six-year gap after graduating from high school. These are just several of the hundreds of lives that have been transformed through the groundbreaking Waiʻaleʻale Project at Kauaʻi Community College, which celebrates its 10th year in 2019.

Since its inception in 2010, the Waiʻaleʻale Project has positively impacted the lives of almost 800 Kauaʻi residents ages 18 through 66. Nearly 300 students have earned a bachelor’s or associate’s degree or a certificate.

Established through a generous donation from philanthropist Jim Lally, and with ongoing support from Kamehameha Schools, the Scheidel Foundation and numerous other benefactors, the Waiʻaleʻale Project encourages and finances non-college-bound high school students and adults to attend, and successfully complete, their first year of college.

The Waiʻaleʻale Project has been life-changing for individuals and their families. Here are some of their stories: 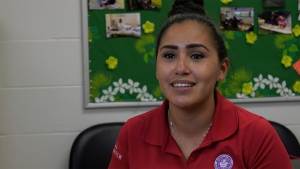 Joana Rodriguez dropped out of high school in the 10th grade, but planned to get a nursing degree. At 16, she was told she was too young and to wait a year to come back. She didn’t come back. Instead, she got pregnant and fell into a drug addiction that lasted six years. During that time, she had a second child and was hospitalized for two months for illness related to her drug use.

While attending an outpatient substance abuse class, she saw an old friend who was in the Waiʻaleʻale program and who helped Rodriguez get an application the next day. She never looked back.

“They helped me to see that I have a purpose. I can succeed in life. I can do good in school,” Rodriguez said. “In my first semester, I got a 4.0 and that just built my confidence.”

She is planning to earn an associate’s degree in business technology and hopes to become a substance abuse counselor.

“In my addiction, I found myself at my lowest point. I thought I was going to die an addict,” she said. “I’m so grateful. My life has changed tremendously and I’m three years clean.”

Rodriguez added, “Waiʻaleʻale is just not a scholarship to help you with your college tuition. It’s also a great program to help people see that they have a future.” 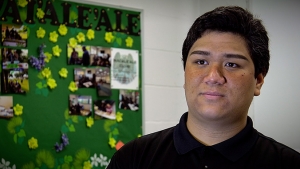 “Waiʻaleʻale is my family. This is where I learned my self-worth, where people really come to fulfill their dreams,” said Austin Manipon-Hamada, who, like Rodriguez, now also serves the program as a peer mentor.

“Whatever your past may be, it doesnʻt define your future. You can be whatever you want and Waiʻaleʻale will support you through thick and thin,” he said. “We are like your best friends, your family, the people you can count on.”

He says when he graduated from high school he did not really think he had a future. 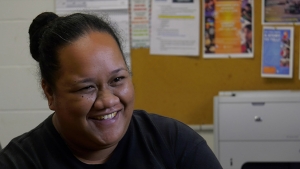 The Niʻihau native and charter school graduate has a quick, hearty laugh to go with her sunny smile. The future wasn’t always so bright. After graduating from high school in 2006, Francine Niau didn’t do much of anything for years, until she ran into a friend at a local shopping center. She was accepted into the Waiʻaleʻale Project and enrolled at Kauaʻi CC in 2012.

“Wow, they made a really big difference,” Niau said. “I’m usually shy and a quiet person. But being part of Waiʻaleʻale and coming to Kauaʻi CC made a big thing, because now I stay all confident.”

She now serves as the assistant for student activities and says the most important aspect of Waiʻaleʻale is the support, which, like the others, she describes as being like a family.

Niau has this advice for Kauaʻi residents: “Take advantage of all the program is willing to help you out. No be scared. Education is the key.” 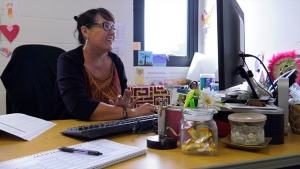 Waiʻaleʻale Program Coordinator Lahea Salazar said they want folks who are NOT college bound to come and give college a try. They can start slow, even if it’s just one class.

“We are trying to fill the gaps in our community,” Salazar said.

The program can be most effective with individuals who may be going through a transition, and who don’t have extra support at home or in their lives. Salazar says the Waiʻaleʻale students do as well and oftentimes better than the mainstream Kauaʻi CC students.

Salazar took over the program three years ago from the first program coordinator, Kimo Perry, who is working to replicate the Waiʻaleʻale Project at all seven University of Hawaiʻi Community College campuses.

“It’s really nice that we’re changing generations,” Salazar said. “Now that we’re at 10 years, it’s the mom and the son, or the daughter and her mom’s with us, the cousins with us. And so we’re changing the whole family.”