A University of Hawaiʻi at Mānoa postdoctoral fellow took part in a world record for the deepest controlled-source electromagnetic (CSEM) survey of the seafloor. At 5,150 meters (approximately 3.2 miles) below sea level, the record-breaking survey happened above an oceanic trench in the Aleutian-Alaska Subduction Zone (AASZ) on June 6, 2019. 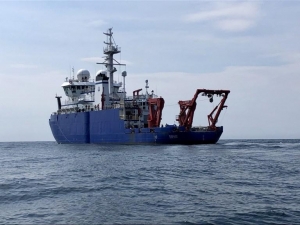 According to Key, Attias helped EMAGE by using his experience working with the instrumentation during the survey and his knowledge of electromagnetic data analysis and modeling to conduct quality control among other duties.

“Eric’s experience…made my life easier since he’s taken on many of the duties I would normally be doing, which means I have more time to concentrate on overseeing the project,” Key explained.

“I was fortunate enough to participate in the EMAGE cruise thanks to my long-lasting collaboration with the Scripps [Institution of Oceanography, University of California, San Diego] and (Lamont-Doherty Earth Observatory, Columbia University) [electromagnetic] groups,” said Attias. “The EMAGE project utilizes a state-of-the-art and unique EM system that was developed by the Scripps EM lab, where only a handful of people worldwide know how to operate. This EM technology helps us to image both the shallow and deep Earth innovatively, while we study the fluid distribution in the crust and upper-mantle rather than structural geology, enabling us to understand the mechanism of the AASZ subduction zone and associated earthquakes.”

CSEM detects formations on the seafloor by transmitting an electromagnetic field through the seafloor and measuring the resistivity of the formations. EMAGE is also using CSEM technology to study the fluid content of the crust and mantle along the Semidi and Shumagin sections of the Aleutian Trench, south of the Alaska Peninsula. Read more about the EMAGE project at the Hawaiʻi EPSCoR website.