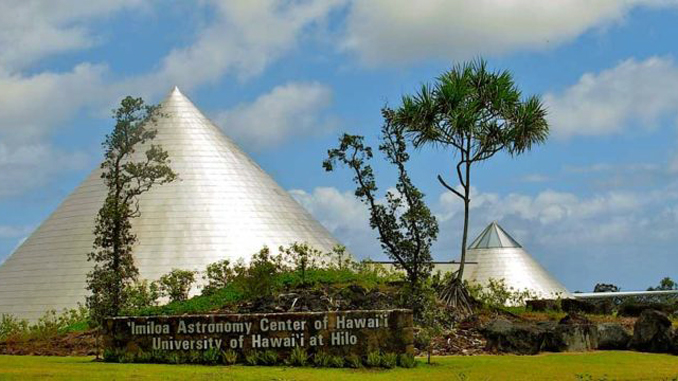 This article originally ran in Capitol Connection, the Hawaiʻi governor’s newsletter, on August 29, 2019.

The ʻImiloa Astronomy Center in Hilo has been doing groundbreaking work to integrate modern science and indigenous culture since the center first opened in 2006. Recently, Hawaiian immersion students and teachers, working with ʻImiloa, have garnered their own share of global attention. Their program aims to make Hawaiʻi the first place in the world to weave indigenous practices into the process of officially naming astronomical discoveries—specifically those by telescopes on Maunakea and Haleakalā.

It’s all part of ʻImiloa’s big-picture mission to connect the scientific work being done on Maunakea with the language and culture of Hawaiʻi. “ʻImiloa was founded on the idea of bringing culture and science together,” explains executive director Kaʻiu Kimura. “We were born from the confluence of parallel trends—the revitalization of Hawaiian language and culture and the understanding of the universe enabled by the Maunakea observatories. We are about enhancing culture and science—together—in a way that promotes mutual understanding and respect between communities.”

The emphasis on “together” is key and has taken on new meaning with the current situation on Maunakea. Kimura says the environment was just as complex back in 2001 when planning for ʻImiloa first started. “There weren’t many science centers founded on indigenous and modern scientific knowledge coming together,” she recalls. “I think it was the first time that members of our Hawaiian and astronomy communities came together to create something.”

The teams of culture specialists and astronomers forged ahead, and the result is a center that has drawn worldwide recognition. ʻImiloa attracts about 100,000 visitors a year to learn about Polynesian voyaging, Hawaiian mythology, the Mauna Kea observatories, planetarium shows and more—all in bilingual exhibits. A recent program featuring renowned UH Hilo Professor Larry Kimura (Kaʻiu’s uncle) and Dr. Doug Simons, director of the Canada-France-Hawaiʻi telescope on Maunakea, drew a standing-room-only crowd.

“We have a strong commitment between ʻImiloa, UH Hilo’s College of Hawaiian Language and Culture and the Maunakea Observatories to continue this work. I’m aware there are some who see ʻImiloa as a proponent of astronomy and, by extension, TMT. But I see our role as critical to bringing the work of the observatories to the community and sharing the culture and values of the community with the astronomical community, both locally and globally. I think it’s important to have a voice that reflects our community’s voice.”

Kimura made her voice heard when she addressed 2,000 world-class astronomers in Seattle this past January at the American Astronomical Society conference. “I checked a lot of the diversity boxes,” she says, chuckling —“female, minority, Native Hawaiian, non-scientist.” Kimura was part of the keynote presentation about the odd interstellar object discovered by telescopes on Haleakalā and Maunakea. The weird-looking “visitor” was given a Hawaiian name, ʻOumuamua, which means “first scout or messenger from a distant place.” Kimura talked about ʻImiloa’s mission of bringing Native Hawaiian culture together with astronomy to inspire more students to love science—and she received a standing ovation for her message.

“Our programs, like A Hua He Inoa, help our youth statewide engage in scientific, astronomical inquiry in a way that reflects the Hawaiian practice of naming celestial objects,” she explained. “I talked about how critical it was to form a true partnership that advances both the science and the indigenous language and knowledge. That co-dependency is so important as we, as a community, move forward so we can advance one another. We feel it’s important to support all of the perspectives on Maunakea and its future. We’re a product of convergence of the Hawaiian language and culture and the revolutionary astronomy being done.

“We want to share the amazing attributes of Maunakea—culturally, scientifically, environmentally. That’s what keeps our staff going every day. ʻImiloa Astronomy Center reflects the spectrum of opinion and how it’s possible for people to come together, to bridge the past and the future, and to learn from each other.”