Bryson Dang is a University of Hawaiʻi at Mānoa super fan. He lives and breathes UH Athletics. This year for his birthday, he talked with his wife and decided instead of a gift, he wanted to do something special. 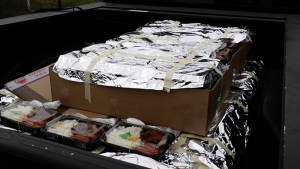 On Friday, August 30, Dang and his wife, Tanna, and their friends, delivered more than 250 bentos and watermelon lemonade to the UH Mānoa Marching Band after practice. The idea was born out of a chance meeting with UH Assistant Band Director Gwen Nakamura. Donning a rainbow balloon hat, she is a fixture at UH Athletic events, often seen cheering as she leads the group of enthusiastic student musicians.

“At first when I told them they were like ‘Really? Someone is feeding all of us?’ They couldn’t believe it. And then when Jamba Juice juice jumped onboard they were super excited,” Nakamura said.

The Dangs own the popular boutique Eden in Love. When Bryson decided he wanted to give back to the UH Mānoa program, they included an opportunity for their shoppers to participate. They sent out emails and social media solicitations that would provide a discount to their fans who donated $10 to the project.

“Me being a former marching band member, I thought it would be super fun to be able to show appreciation for everything that the band does,” Bryson Dang said. “Because you know no matter win or lose, they bring it all the time.”

The Dangs said that after the word got out that they were trying to do something special for the band Jamba Juice wanted to provide drinks. When Tanioka’s Seafoods and Catering learned what the large purchase of bentos was for, they provided a discount.

“I thought it was surprising at first that someone wanted to donate to us. It’s kind of nice to know that we are really appreciated,” UH Band Drum Major Freddy Schulz said.

At the end, UH Head Football Coach Nick Rolovich chatted with Bryson, helped pass out bentos and presented Bryson with a football signed as a mahalo gift for their generous donation. It will surely have a place of honor among the other memorabilia he has treasured over the years. 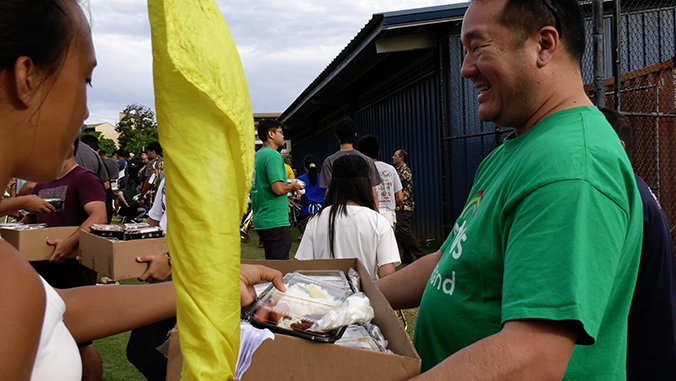