A University of Hawaiʻi at Mānoa professor’s new book uses the story of Leonard Bernstein’s relationships with two unknown Japanese individuals to trace his transformation from an American celebrity to a world renowned maestro.

Dearest Lenny: Letters from Japan and the Making of the World Maestro by American Studies Professor Mari Yoshihara offers new perspectives on one of the most famous American maestros based on never before seen, intimate letters from Kazuko Amano and Kunihiko Hashimoto. 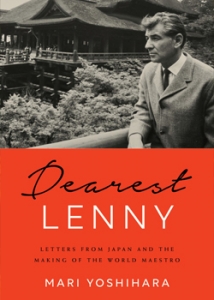 Amano is a woman who began writing fan letters to Bernstein in 1947 after reading his essay in a magazine at a Tokyo library operated by U.S. occupation forces. She eventually became a close family friend and most loyal fan of the maestro for more than four decades.

Hashimoto was a 26-year-old Tokyo insurance worker when he met Bernstein in 1979 after going backstage with a friend after a concert and ended up spending the night with him. Hashimoto went on to have not only a romantic relationship with Bernstein during the last decade of the maestro’s life, but a professional one as well. Hashimoto also played a crucial role in some of Bernstein’s major projects, including organizing Hiroshima peace concerts in 1985, assisting in the inaugural Pacific Music Festival in Sapporo in 1990, and producing a translation of Bernstein’s musical Candide after the maestro’s passing.

Yoshihara accidentally encountered a cache of Hashimoto’s and Amano’s letters when she was researching a completely different project in the Leonard Bernstein Collection at the Library of Congress in Washington, D.C.

“Both of their letters were so moving in their sincerity and passion, and so illuminating of how Bernstein and his music touched audiences around the world, that I changed my project altogether to write this book,” said Yoshihara.

She added, “Research and writing of this book took me on an amazing journey with so many unexpected twists and turns—including my meeting both Amano and Hashimoto in person. Finding their letters was the kind of discovery that researchers only dream of.”

A news story based on the book appeared in The Guardian.