University of Hawaiʻi at Mānoa Academy for Creative Media (ACM) alumna Erin Lau’s short-film The Moon and the Night was selected as the favorite film Juried Prize winner of the 2019 PBS Online Film Festival by a panel of eight jury members. Lau is currently working in Los Angeles as a producer-director for Jubilee Media, as well as writing and directing her own projects.

The PBS Online Film Festival features 25 short-form independent films. It is part of a multi-platform initiative to increase the reach and visibility of independent filmmakers, and to provide a showcase for diverse storytelling that both inspires and engages.

“The Moon and the Night” is set in rural Hawaiʻi, where a Native Hawaiian girl must confront her father after he enters her beloved pet in a dogfight. The film explores the cultural and socio-economic strife that burdens many communities in Hawaiʻi, but at its heart, it is a coming-of-age tale of a young woman who must make the difficult realization that to save her family, she must stand on her own. Justin Omori, 2014 ACM graduate, was also a writer for this dramatic short film. 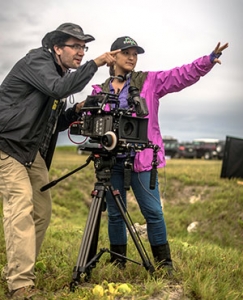 “I’ve only reached this point in my filmmaking career because of the lessons the UH Academy for Creative Media instilled in me, which is to put my focus on embracing who I am and what I care about then translating that into the work,” said Lau. “To this day I still reach out to my ACM professors for feedback and guidance on my narrative projects. They’ve had a huge impact on how I’ve grown as a filmmaker and person.”

Lau graduated from ACM in 2015. As an ACM major, she made a number of award-winning narrative and documentary short films that screened at numerous international film festivals around the world.

She took part twice in ACM’s SMART Exchange in Shanghai. In 2013 her script for Little Girl’s War Cry was selected out of more than 2,000 scripts for the Ambassador for Peace Film Award in the Film Raro Film Makers Paradise Challenge, which allowed her to travel to the Cook Islands to shoot the film. Later that year the film won the Hawaiʻi International Film Festival’s Eurocinema Best Student Film Award.

Her ultimate dream is that her work will help to empower and inspire minority and female voices.