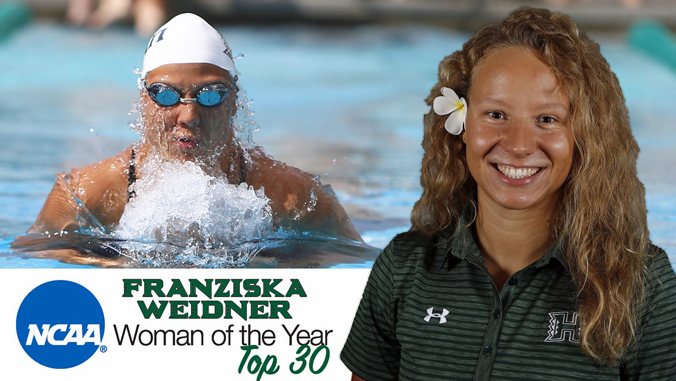 Franziska Weidner of the University of Hawaiʻi at Mānoa swimming and diving program was selected as a Top 30 honoree to the NCAA Woman of the Year award. The Top 30 honorees were selected from an initial pool of 585 school nominees, a program record.

The Top 30 honorees have demonstrated excellence in academics, athletics, community service and leadership. They will be celebrated and the Woman of the Year will be named on October 20 at a ceremony in Indianapolis.

At UH, Weidner secured her name as one of the best to ever compete in the swimming and diving program. She was named a 2018 All-American in the 100 breaststroke and was named the MPSF Female Swimmer of the year for a third consecutive season. She was also named to the CSCAA Scholar All-America Team as a senior while being placed on the MPSF All-Academic team for three straight seasons.

Weidner graduated from UH in May with a bachelor of arts degree in psychology and is pursuing her goal of becoming a professional swimmer in her home country of Germany.

“This year’s 30 honorees are remarkable women, representing well the thousands of women competing each year in college sports,” said Karen Baebler, chair of the Woman of the Year selection committee and assistant athletics director for sport operations at the University of Washington. “They have excelled in sports and academics while serving their peers and communities, and we congratulate them for their many achievements.”