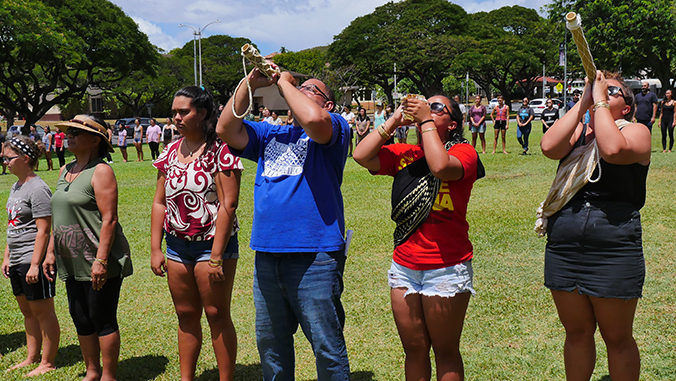 The start of the fall semester not only marked the first day of classes, but for a group of students, it marked day one of a sit-in protest at Bachman Hall on the University of Hawaiʻi Mānoa campus. This is the latest in a long line of sit-in protests at Bachman that date back to the late 1960s.

The students say they are affirming their commitment to protect Maunakea and their opposition to the construction of the Thirty Meter Telescope (TMT) on the summit of Maunakea.

They have been hosting ʻAha (ceremony) three times a day at Ke Ahu o Wise, the altar on the lawn fronting Bachman Hall that was first raised in 2015 in response to the TMT conflict. Bamboo structures honoring the 38 kupuna arrested while blocking the access road to Maunakea on July 17, 2019, have been placed around the altar. 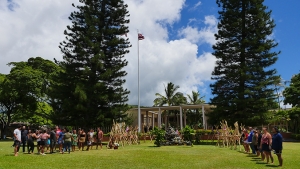 “We as students can make a difference,” said Beau Shishido, a UH Mānoa ʻŌlelo Hawaiʻi graduate student and one of the sit-in organizers. “It’s about holding administration, the university accountable. Research conducted by the University of Hawaiʻi should not be at the expense of Hawaiian religion, culture, or people.”

In 1968, there was a 10-day student and faculty sit-in protesting the Vietnam War and the denial of tenure for a political science professor who had served as advisor of an anti-war student group.

It lasted for days while hundreds of students and faculty camped out inside the building as well as on the front lawn. During the protest, students even renamed the Bachman “Liberation Hall.” Even though several students were arrested, UH Mānoa Emeritus Assistant Vice Chancellor for Student Diversity Amy Agbayani remembers the teach-in, as she also refers to it, as peaceful and non-violent.

“The sit-in at Bachman was an educational movement for students and the community who weren’t aware of the issues and facts surrounding the anti-war movement and academic freedom at the time,” said Agbayani, then a political science graduate student. “It was well-organized, and we had good face-to-face communication with then administrator Robert Potter, who would come down and talk with us one-on-one.”

In 1995, faculty staged a teach-in and march on the front lawn of Bachman Hall challenging a $9 million state appropriation cut proposed by then Governor Ben Cayetano that would endanger UH Mānoa programs.

The 2005 sit-in lasted seven days when hundreds of students, faculty and supporters occupied the president’s office on the second floor of Bachman Hall protesting the proposed University Affiliated Research Center that would receive $50 million funding from the United States Navy. Protestors worried the university would engage in classified military research and lead to an increased military presence in Hawaiʻi.

The March and April 2006 protest at Bachman Hall was in opposition to UH Mānoa’s College of Tropical Agriculture and Human Resources patenting three varieties of hybridized Hawaiian taro. Protestors cited the cultural significance of taro and said that UH did not own the rights to it nor should it profit from it.

There have been other demonstrations that have taken place at Bachman Hall over the years as well, according to long-time campus community members.

Agbayani says sit-ins at Bachman are a good tradition that creates an educational opportunity for both sides to talk, as well as draw community support. She added, “The point of a demonstration is to start the conversation, start talking, even though both sides may not always agree.”

UH Mānoa student Tiele-Lauren Doudt, one of the organizers of the TMT sit-in protest, believes the current sit-in is the longest in Bachmanʻs history. Itʻs a tradition she plans to support after she graduates.

“Who knows, perhaps one day when we become kūpuna, there will be a new generation of students rising to address UH and state agendas,” said Doudt. “If or when that ever happens, we will join them here at Bachman, to let them know that they are not alone in the struggle for justice.” 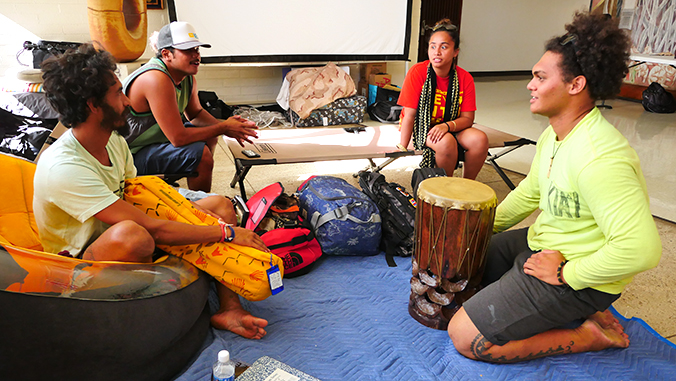