With a traditional kīpaepae ceremony, University of Hawaiʻi students, faculty and staff welcomed a record breaking audience of 5,000 attendees gathered for the Society for Advancement of Chicanos, Hispanics and Native Americans in Science or SACNAS National Diversity in STEM Conference at the Hawaiʻi Convention Center.

The 46-year-old conference is the largest and most diverse gathering of underrepresented minority STEM leaders, professionals, scientists and students in the nation. 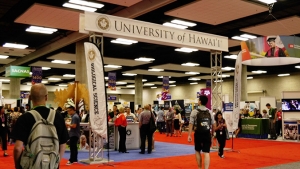 The University of Hawaiʻi is this year’s presenting sponsor. Hawaiʻi tourism officials said the estimated economic impact of the conference was around $23 million, which is much higher than had originally been anticipated.

Marshall Islands President Hilda Heine, the opening keynote speaker, called for a united front in taking climate action on behalf of those first and most affected by its impacts.

“The time has come for has come for the global community to seek viable and effective solutions to the climate crisis and to do so with unrestrained speed,” Heine said. “It is my hope that the global community can summon the leadership needed to urgently increase its ambition to get us on a pathway consistent with the Paris agreement and to avoid the worst impacts of climate change.”

Polynesian Voyaging Society President Nainoa Thompson was another featured speaker. He spoke of the need to blend culture and science to address the worldʻs challenges and also gave a nod to UH’s role.

“How important the University of Hawaiʻi is to the future of Hawaiʻi,” Thompson said. “It is such an extraordinary world-class place, doing amazing work.”

The conference is a training ground for the next generation of diverse STEM professionals, aiming to level the playing field for first-generation college students of color through mentorship, professional development and networking opportunities.