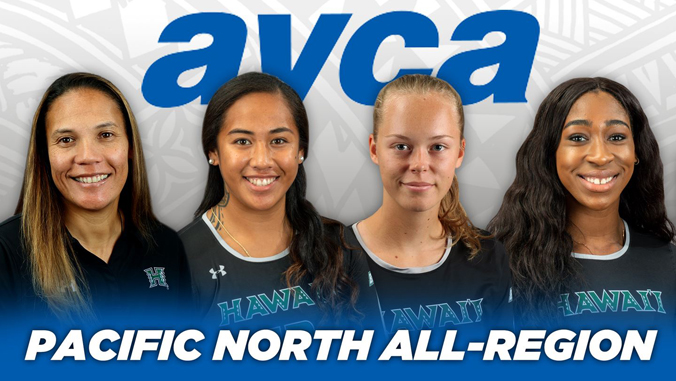 It marked the first All-Region Coach of the Year honor for third-year head coach Ah Mow. This season, Ah Mow has her squad on a 13-match win streak and advancing to its first NCAA Regional since 2015. The ’Bows captured the Big West title for the first time since 2016 and the first time under Ah Mow’s leadership. She has led Hawaiʻi to a 26-3 overall record this season, which is the most wins for UH since 2015. She was also named Big West Co-Coach of the Year for the first time, sharing the honor with Cal State Fullerton’s Ashley Preston.

Senior setter/opposite Iosia is one of only two Rainbow Wahine along with fellow setter Bailey Choy to play all 111 sets this season. Iosia leads UH with 626 assists, 318 digs and 48 service aces. She continues to climb the UH record books as well—ranked No. 2 with 139 service aces, No. 8 with 1,162 digs and No. 9 in assists with 3,129.

As a freshman, Hellvig has had to shoulder much of the offensive load since the eighth match of the season. She has been solid all season and leads UH with 342 kills and is averaging 3.14 kills per set. Hellvig has been in on 78 total blocks with 189 digs, and 15 service aces. Hellvig was also named to the all-Big West first team and the all-freshman team.

Freshman middle blocker Igiede has become a formidable force on the court. The rookie leads UH with 125 total blocks including 19 solo. She is also second on the team with 211 kills and a .359 hitting percentage. Igiede also earned a spot on the Big West all-freshman team.

For more go to the UH Mānoa Athletics department website.