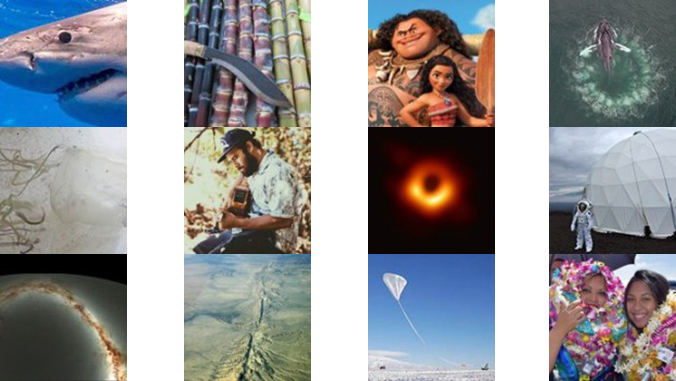 As a new decade begins, take a look back at some of the closing decade’s most popular UH News stories, highlighting the outstanding research, academic achievement and community impact from the University of Hawaiʻi. Stories like these helped UH News hit 1 million views in a single year in 2019. Looking forward to more amazing stories from and for the UH ʻohana.

Jellyfish research: ecosystem benefits and sting treatments
UH researchers found that jellyfish “blooms” and subsequent die offs do not, as previously assumed, create “jelly lakes” on the sea floor, choking those habitats of oxygen, but instead are rapidly consumed by deep-water scavengers. In another study, UH researchers tested common treatments for jellyfish stings and found that many actually worsen the effects of the stings.

‘What you smoking?’ asks UH Hilo instructor in his hit song ‘Smoke All Day’
Kaʻikena Scanlan knows what people will assume when they hear the title of his reggae style song, “Smoke All Day.” That, he says, is intentional. Scanlan’s catchy reggae vibe about smoked meat went viral after its release on November 28, 2018, receiving airplay on many local radio stations. Part of its popularity, beyond its catchy reggae vibe and Scanlan’s smooth delivery, are the lyrics.

UH Hilo professor names black hole capturing world’s attention
Hawaiian language expert Larry Kimura worked with astronomers to give a Hawaiian name to the first black hole to be fully imaged. Pōwehi, meaning embellished dark source of unending creation, is sourced from the Kumulipo, the chant describing the creation of the Hawaiian universe. Hawaiʻi astronomy played a vital role in producing the world’s very first image of a black hole.

Hawaiʻi Space Exploration Analog and Simulation
Crew members came from many different countries to simulate a Mars expeditions in the HI-SEAS habitat on Mauna Loa. HI-SEAS researchers looked to develop effective team composition and support strategies to allow crews to successfully travel to Mars and back. The one-year HI-SEAS mission in 2016 gathered an international following with multiple news crews documenting the exit from the habitat. Read more about the HI-SEAS missions and crews.

UH collaborates on Hawaiian language version of Disney’s Moana
Five UH programs collaborated on the ʻōlelo Hawaiʻi version of Disney’s Moana. The project was spearheaded by the Academy for Creative Media System and was recorded at the sound studio of Honolulu Community College’s Music and Entertainment Learning Experience program. The star of the original film, Auliʻi Cravalho, is among those bringing the Hawaiian language version to life.

Largest digital sky survey released by Pan-STARRS
The Panoramic Survey Telescope and Rapid Response System project publicly released the world’s largest digital sky survey. The four years of data comprise 3 billion separate sources, including stars, galaxies and various other objects. The immense collection contains 2 petabytes of data, which is equivalent to one billion selfies, or one hundred times the total content of Wikipedia.

Sugarcane is not dead, just different
Sugarcane, also known as kō, may not be king anymore in Hawaiʻi, but UH researchers see a sweet future ahead for the traditional plant. They are helping local growers and processors to choose and cultivate native varieties that are best for their purposes, including cane skewers and swizzle sticks and rum agricola, a fresh cane-juice rum.

Listening for neutrinos at the bottom of the world
Professor Peter Gorham’s work takes him to the frozen expanse of a faraway continent searching for the elusive neutrino, a tiny particle capable of traveling at light speed, with the Antarctic Impulsive Transient Antenna or ANITA. Neutrinos are fundamental particles of the universe, born in the incredible energy of the Big Bang, and, Antarctica is a perfect place to study them.

Shark study helps explain higher incidence of encounters off Maui
UH research is providing state leaders with critical information to better develop efforts to minimize possibly dangerous encounters with tiger sharks. The large area of shelf habitat around Maui attracts tiger sharks from other parts of Hawaiʻi and the sharks that regularly reside in Maui Nui are less likely to travel away from the area.

We love our grads!
And finally, the photo round-ups of spring commencement for all 10 UH campuses were always popular. While students have different goals and motivations, obtaining a degree or certificate is the main reason most of them attend college or university. We love our students’ pride and happiness as they celebrate their academic achievements. Which year was your favorite? 2019, 2018, 2017, 2016, 2015.