Award-winning poet, writer, editor and filmmaker Allison Hedge Coke will be reading and speaking in a series of public events as the spring 2020 Dan and Maggie Inouye Distinguished Chair in Democratic Ideals at the University of Hawaiʻi at Mānoa. Hedge Coke will present a keynote lecture on Made Measure: Everything We Do in Our Detail in Life, on Wednesday, April 22, at 7 p.m., in the UH Mānoa Art Auditorium.

A distinguished professor at the University of California at Riverside, Hedge Coke is of indigenous and European descent, and many of her writings powerfully explore her heritage and coming of age working in fields, factories and waters. 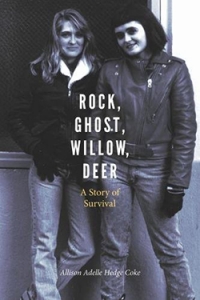 As the Dan and Maggie Inouye Distinguished Chair in Democratic Ideals, Hedge Coke will spend the spring semester at UH Mānoa, co-teaching Indigenous Lands and Waters with Associate Professor Brandy Nālani McDougall in the Department of American Studies.

Said McDougall, “We are very honored to host Allison Hedge Coke, who is among the most important environmental and social justice poets, thinkers, and activists of our time. Her literary contributions of poetry and other writings and documentary filmmaking over the past 25 years, as well as her work to create spaces for marginalized voices and to protect plants, animals, and sacred sites, have been tremendous both in scope and impact. Our communities will gain so much from her being here and sharing her thoughtful, generous, and healing work.”

Recent honors include an honorary credential from China for Excellence in Foreign Poetry, the First Jade Nurtured SiHui Female International Poet (2018), a Lifetime Achievement Award by the Native Writers Circle of the Americas (2017), the Library of Congress Witter Bynner Fellow (2016), and Distinguished Writer in Residence at UH Mānoa (2014). Current projects include a film, Red Dust: resiliency in the dirty thirties, a new CD, a VA NCA Legacy Program sponsored community project Along the Chaparral, new poems and prose.

The events are free and open to the public. Hedge Coke is available for readings, conversations and interviews until the first week of May.

Established in 2005 by the UH Board of Regents, the Dan and Maggie Inouye Distinguished Chair in Democratic Ideals brings significant public figures to Hawaiʻi to foster public discourse regarding democratic ideals and civic engagement. The program honors U.S. Sen. Daniel Inouye and his wife, Maggie, for their lifetime of public service. The chair is housed in the UH Mānoa Department of American Studies in the College of Arts and Humanities and the William S. Richardson School of Law.