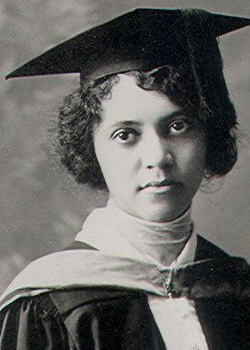 Alice Augusta Ball, University of Hawaiʻi’s first female and first African-American graduate, was honored alongside Marie Skłodowska-Curie (a.k.a. Madam Curie) and Florence Nightingale, with their names etched on the façade of the London School of Hygiene & Tropical Medicine (LSHTM). The school celebrated its 120th anniversary in 2019.

Ball, who passed away at the age of 24, was also the first person in the world to develop a treatment for Hansen’s disease in 1916 using oil from the Chaulmoogra tree.

“Alice Ball discovered the first effective treatment for leprosy; not a cure, but a treatment that worked,” said Paul Wermager, head of the science and technology department at Hamilton Library for 19 years until his retirement in 2010. “The biggest thing she changed in the world is that she gave us hope.”

Wermager has done extensive research on Ball’s accomplishments and even established a UH Foundation scholarship to assist underrepresented minority females who, like Ball, also hope to enter the science field.

Name suggestions were submitted by LSHTM staff, all from an era in keeping with the building, which opened in 1929.

The trio joins 23 other health and tropical medicine innovators, all men, whose names are currently on the frieze, the decorative band wraps around the LSHTM building. Some names include LSHTM founder Sir Patrick Manson, Nobel Prize winner Sir Ronald Ross and microbiologist Louis Pasteur.

Who is Alice Augusta Ball?