The University of Hawaiʻi officially released its latest biennial student survey Friday, February 7, 2020 on sexual harassment and gender-based violence, issues that are prevalent among college students nationwide. The student survey of the 10-campus system is an important tool for UH in providing a safe and discrimination-free learning and working environment and is considered a national best practice. The 2019 survey updates the benchmarks set in the inaugural 2017 survey, among the first in the nation to cover the students of an entire university system—four-year universities, community colleges and graduate and professional schools, on- and off-campus. 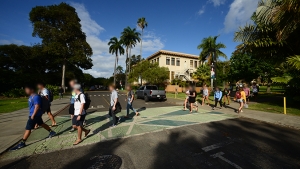 More than 6,300 students, or 15.5 percent of UH’s approximately 40,861 adult students participated in the 2019 survey, a 1.4-point increase from 2017. The survey consisted of 143 questions that covered four areas: prevalence of sexual harassment and gender violence, student assessment of the university’s response, student perceptions of campus safety and student awareness of policies, processes and programs.

“The biennial studies provide the data we need to understand where we have issues and, over time, how we are doing in addressing them,” said UH President David Lassner. “Optimal learning outcomes are nearly impossible to achieve if students are being harassed or worse, and we are committed to providing an equitable environment in which students can focus on their studies.”

As the 2017 survey also revealed, UH students continued to feel personally safe on-campus and at off-campus university events. The overwhelming majority of the students surveyed, 86.3 percent (or almost 9 in 10 UH students), said they felt little or no personal risk of being sexually harassed or sexually assaulted while on campus. On the question of how problematic sexual assault or harassment is at UH, 66.5 percent of students reported that the issue of sexual harassment and sexual assault at UH is a little problematic (27.3 percent) or not at all problematic (39.2 percent). The number of students selecting the “Not at all” option, increased significantly by 9 percentage points from the 2017 survey. Also, three out of four students said they felt little or no risk attending UH-sponsored off-campus events, with half indicating no risk (47.4 percent).

Overall, student awareness of UH services increased. For example, 86 percent of students reported that they had seen or heard of resources available to students experiencing gender violence. A modest one percent increase from the 2017 survey.

Among students contacting UH programs, a large majority felt officials treated them respectfully, protected their privacy, showed concern for their safety and advised them on their options.

There was an increase of reported incidents in each of the four areas covered by the 2019 student survey, when compared to the 2017 survey results. This was expected with greater awareness of these issues on UH campuses and in the national conversation with the #MeToo movement. When students were asked about their experiences anytime and anywhere while enrolled at UH:

The numbers dropped when students were asked about their experiences during the current academic year:

“With greater awareness, we believe more students will feel safe and will utilize the confidential resources available to get the help they need,” said Lassner.

The university’s student survey is modeled after a biennial survey by the Association of American Universities (AAU). The results of AAU’s third and latest survey were released in October 2019 with a total of 181,752 students from 33 colleges and universities participating. The rates of nonconsensual sexual contact and sexual harassment any time while enrolled were higher in the AAU student survey. The rates of stalking and intimate partner violence were higher in the UH survey, though it is important to note that the UH survey defines stalking and dating and domestic violence more broadly.

The 246-page 2019 survey report provides data on each of the 10 UH campuses. In 2018, each campus implemented action plans addressing the results of the 2017 survey. The 2019 survey will be used to assess the effectiveness and update those action plans, and the campuses will have more data available. Compared to 2017, the 2019 survey report provides more information of those accused of sexual harassment and gender-based violence including their relationship with the complainant and their association with the university.

The data will also be used to assess the university’s progress and to guide policy, training and initiatives to meet the university’s obligations under the Violence Against Women Act and Title IX, the federal law prohibiting sexual discrimination in any education program or activity receiving federal funding. The climate survey was one of the many steps identified and pursued by the university to strengthen its Title IX response and support services. It received widespread support from state lawmakers and was mandated by the legislature through Act 208 in 2016.

The survey was conducted by Hawaiʻi-based OmniTrak Group Inc. from January 21 to February 21, 2019, with consultation from nationally-renowned subject matter experts Professor Sandra L. Martin of the University of North Carolina and Professor Bonnie S. Fisher of the University of Cincinnati who consulted on the Association of American Universities 2015 and 2019 Campus Climate Surveys on Sexual Assault and Sexual Misconduct.

Aloha to all our UH students,

In spring 2019, more than 6,300 of our 40,861 adult students from the 10 UH campuses, participated in a survey that asked about their experiences with sexual harassment and gender-based violence on and off campus. The results are now available, and I encourage everyone to take the time to review them as they provide insight into issues that may have either impacted you directly, or someone you know.

The survey results will be used by the university to continue improving its policy and training initiatives to address sexual harassment and gender-based violence. The results will also be used as part of a longitudinal study with the next survey scheduled in 2021.

Another positive result of the surveys is raising awareness around these very important issues like intimate partner violence (IPV), also known as dating and domestic violence. If you are a victim of IPV, sexual harassment or gender violence, please know that the following help is available, including on a confidential basis.

UH is committed to ensuring safe and respectful campus environments. Students as well as our entire community have important roles to play by being aware of the issues, watching out for one another and reporting violations. I encourage everyone, if you have not already, to take the free, online training on sex discrimination and gender-based violence for students.

We have made significant strides in addressing these issues over the past several years, but our goal is campus life free of sexual harassment and gender violence, and we have even more to do.