In her new book, Skimmed: Breastfeeding, Race and Injustice, University of Hawaiʻi at Mānoa Associate Professor of Law Andrea Freeman tells the story of the famous “Fultz Quads”—four identical sisters born into a North Carolina tenant farming family in 1946, America’s first surviving African American quadruplets. Their white doctor sold the rights to use the girls for marketing purposes to the highest-bidding formula company. More than half a century later, baby formula is a $70 billion industry and African American mothers have the lowest breastfeeding rates in the country.

Freeman explores what she described as “food oppression”—cooperation between government and the food, agricultural and pharmaceutical industries that leads to race, gender and class disparities. 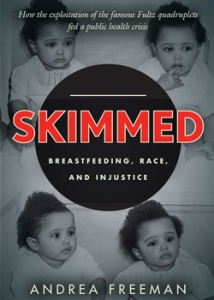 The story of the Fultz sisters “encapsulates a nationwide injustice,” said Freeman. “Since slavery, legal, political and societal factors have routinely denied black women the ability to choose how to feed their babies.”

Her book also explores historical and current beliefs about breastfeeding, as well as how law and policy lead to “first” food oppression affecting America’s youngest citizens.

William S. Richardson School of Law Dean Avi Soifer said, “Andrea’s book is a major achievement, and it is already generating a great deal of attention across multiple academic areas, but it is certainly not only of academic interest. It ought to be and will be widely read by the general public.”

Freeman will discuss her new book on Friday, February 21 at 5:30 p.m. in the Davis Levin Livingston Moot Court Room at UH Mānoa’s William S. Richardson School of Law. Khara Jabola-Carolus, executive director of the Hawaiʻi Committee on the Status of Women, will join Freeman in the discussion.

Freeman will be available to sign her book after the law school talk. Light pupus will be served. Books will also be available for purchase.

A second discussion will be held on Sunday, February 23, 1–2:30 p.m. at da Shop bookstore at 3565 Harding Ave. This event will also include an open discussion with the audience as well as family-friendly art activities.