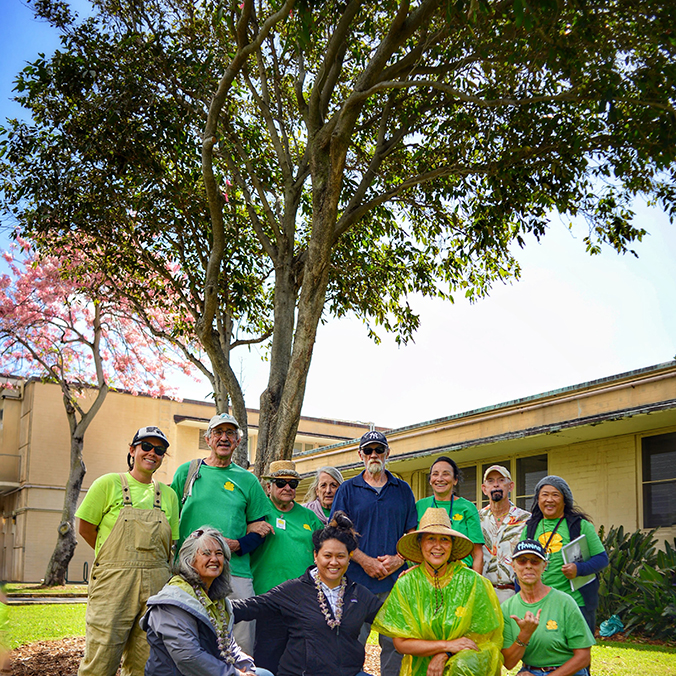 The University of Hawaiʻi at Mānoa Master Gardeners, based in the College of Tropical Agriculture and Human Resources, celebrated the legacy of the late Alice Augusta Ball under the chaulmoogra tree behind Bachman Hall on Friday, February 28. The tree was planted in her honor by the King Prajadhipok of Siam in 1935.

Ball is a 1915 UH Mānoa graduate with an impressive list of firsts. She was the first woman to earn a master’s degree in chemistry and the school’s first African American female chemistry instructor.

An instructor and then head of the chemistry department, Ball first studied kava but later began to research chaulmoogra, a tree that had long been used in Ayurvedic medicine. She succeeded in creating an injectable form of chaulmoogra oil, which became the most effective treatment for Hansen’s disease in the first half of the twentieth century. Ball, who died at the age of 24, is forever memorialized with a plaque that sits in front of the tree. 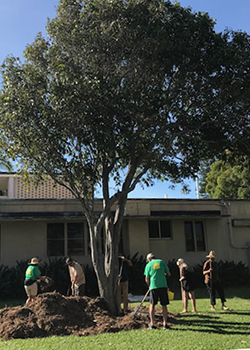 A group of Master Gardeners, with the support of the UH Campus Arboretum, including the UH Mānoa grounds and landscaping crew, have adopted and cared for the chaulmoogra tree over the past two years. The group has pruned the tree and brought in mulch, fertilizer and compost to improve its health.

“It’s great to work with such a passionate group of Master Gardeners, who have given this tree some aloha. They’re breathing new life into it, which is what we’re here celebrating today,” said Roxanne Adams, UH Mānoa director of buildings and grounds.

The group hopes to harvest seeds from the tree to propagate a seedling to give to Kalaupapa National Historical Park, the site of the former Hansen’s disease community of Molokaʻi. Some members of the group have already brought seed pods from the chaulmoogra tree at Foster Botanical Garden to the settlement to begin propagating an exhibit tree there. Another chaulmoogra tree is planted at UH’s Lyon Arboretum.

UH Master Gardener Julian Lipsher said, “Propagating the seeds from the chaulmoogra tree and establishing a relationship with Kalaupapa National Historical Park further enables us to acknowledge and carry on the legacy of Alice Ball.”