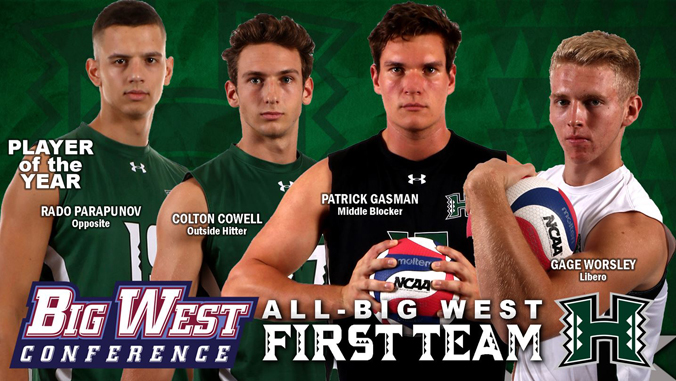 A University of Hawaiʻi at Mānoa men’s volleyball player has been selected as the Big West Conference’s player of the year. Senior opposite Rado Parapunov and three other Rainbow Warriors were also named to the all-Big West first team, and three were chosen for the seven-member all-freshman team.

Parapunov is UH‘s first conference player of the year since Costas Theocharidis won Mountain Pacific Sports Federation honors in 2001 and 2003. The Sofia, Bulgaria native led the Big West and ranked No. 2 nationally in kills per set (4.47) while hitting .377, which ranked No. 15 nationally. Parapunov posted career-high averages in kills and digs per set (1.44) while also averaging 0.84 blocks per set along with 16 service aces. He tallied a career-high 30 kills in a five-set, come-from-behind victory over No. 2 BYU.

Middle blocker Patrick Gasman, libero Gage Worsley and outside hitter Colton Cowell were picked to the first team as the Rainbow Warriors led all Big West teams with four first-team honorees among the 14 selections. Gasman is the conference’s first three-time first-team honoree while Worsley and Parapunov each picked up their second award.

In addition, setter Brett Sheward, middle blocker Guilherme Voss and outside hitter Chaz Galloway were selected to the all-freshman team.