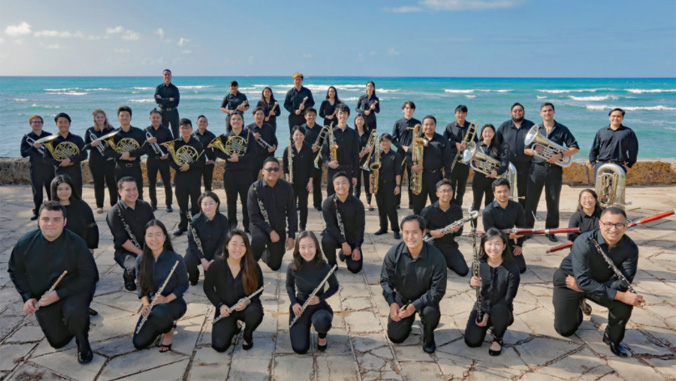 Even with current social distancing restrictions, the University of Hawaiʻi at Mānoa Wind Ensemble is safely sharing music. The ensemble released videos of their performance of the Symphony of the Hawaiian Birds paired with animations from the project on YouTube and Facebook.

“We were so looking forward to sharing our Symphony of the Hawaiian Birds, the wonderful people in our UH Wind Ensemble and a little aloha spirit with the wider musical world,” said Jeffrey Boeckman, associate professor and director of bands.

The Symphony of the Hawaiian Birds is a multidisciplinary effort to educate elementary and secondary students about Hawaiʻi’s endangered native bird species and the importance of conservation efforts. UH composers, conservation researchers, educators and animators worked together to create a program that was originally performed by the Hawaiʻi Symphony Orchestra for Hawaiʻi elementary, intermediate and high school students.

The symphony movements were arranged for the UH Mānoa Wind Ensemble who brought the project to Kauaʻi in February. In addition to performing the music, the educational component was specifically designed for Kauaʻi schools. The ensemble performed two keiki concerts for students and a standing-room-only ʻohana concert for the Kauaʻi community that benefited the Kauaʻi Forest Bird Recovery Project.

“I’ve been so impressed with our students, who invested a great deal of themselves in this tour over many months—their time, energy, musicianship and enthusiasm—and are making music on such a high level,” said Boeckman.

The ensemble’s performance on March 1, at McKinley High School was recorded and combined with the animations shown at the concerts. The videos are posted to the UH Bands accounts on YouTube and Facebook.