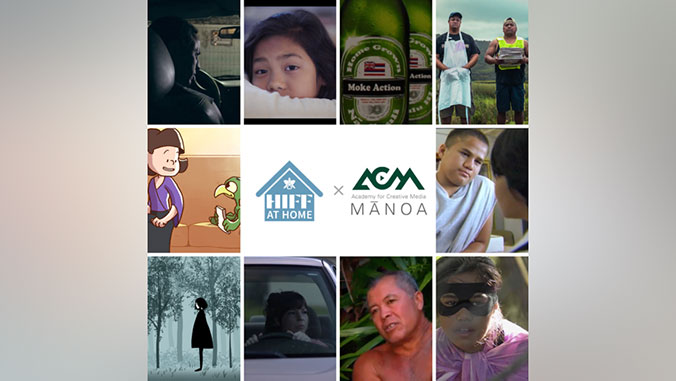 University of Hawaiʻi at Mānoa Academy for Creative Media students will showcase their works at the world-renowned Hawaiʻi International Film Festival (HIFF).

Due to the COVID-19 pandemic, the festival launched HIFF@HOME to offer the best of HIFF short films virtually. On May 15, HIFF@HOME will premiere the Best of UH Mānoa’s Academy for Creative Media at HIFF—a compilation of the best films produced by its students. This collection of 10 films was selected by the festival organizers.

“We hope the viewers are able to see the talent that is present in Hawaiʻi and being nurtured at ACM since its inception,” ACM Mānoa Chair Christine Acham said. “These filmmakers have unique perspectives and styles, and HIFF has been a wonderful and prestigious festival for the students to premiere their work.”

UH Mānoa’s ACM program has a long-standing partnership with HIFF. Chris Lee, the founder and director of the UH Academy for Creative Media System, wanted a prominent venue to showcase films by ACM Mānoa students. In 2004, Lee and HIFF worked out an arrangement for the original ACM Mānoa Night, an event held annually since.

“ACM filmmakers have also gone on to have careers and success both in Hawaiʻi, on the U.S. mainland and internationally,” Acham said. “We hope, of course, that seeing the showcase will encourage more young artists from across the islands to apply to and join our department.”

Best of ACM Mānoa at HIFF

Arucan created his film as part of an animation class and it was the second short film he created in ACM Mānoa. “The screenplay was inspired by the Japanese folklore of the kappa monster, which I adapted into a story about toxic relationships. Since animation is very time consuming, I developed a simple, but stunning art design and ‘staccato’ style of animation to make production go by a little faster while still being effective.” Arucan is graduating this spring and will be working on several films.

Detwiler, who is graduating this spring with a BA in English and creative media with a focus on animation and a minor in music, said animation is difficult work. However, watching the pictures move together in the end is the reward. “I chose to visually interact between the past and the present through two different styles of animation.” This summer, Detwiler will work as a mentor with the ʻŌlino Arts summer animation program and will enroll in the UH Mānoa English MA program this fall.

Backe said she often went off script during the filming of Sincerely, Kaye. “I learned so much about myself and the openness of the people around me all because of vulnerability. I discovered the beauty of the film was creating my own peace with the past.” Since graduating, Backe said she is currently working on a personal film about a dive shop in Palau where her and her friends grew up.

Lau is a senior producer/director for Jubilee Media, a digital media company based in Los Angeles. She said her film Little Girl’s War Cry was one of six projects selected by FilmRaro to be fully funded, shot and premiered in Rarotonga, Cook Islands. “Once we arrived in Rarotonga, we ended up shooting, editing and premiering the film to the community within one week. We collaborated with a handful of local actors and crew hands once we arrived, making for one of the most memorable filmmaking experiences I’ve ever had.” Lau said her ACM Mānoa professors were a constant source of support and would not be where she is today without them.

Bocchieri, who is a co-creative director at Lumos Media and freelance filmmaker, said No More Aloha was his final ACM Mānoa creation and favorite film he’s ever made. “I lived in Kailua at the time and I had seen it change drastically over a few short years, so I wanted to make a film about people adapting to changes without losing who they are.” Bocchieri credits ACM Mānoa with creating an environment surrounded by filmmakers, which helped him learn and grow his skills.