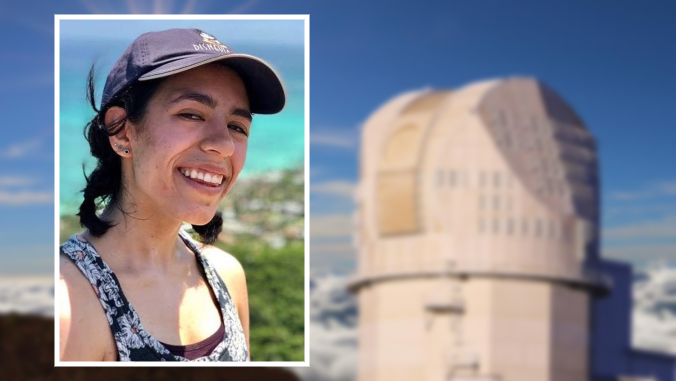 A graduate student at the University of Hawaiʻi at Mānoa Institute for Astronomy (IfA) has received the 2020 American Astronomical Society (AAS) Solar Physics Division Popular Writing Award. Ellis Avallone, a second-year graduate student studying solar physics, explained the role of the Sun’s rotation rate during the formation of the solar system. Studies connect the speed of our Sun’s rotation to the composition of the inner planets of our solar system, using clues gathered from the Earth’s moon.

“The Moon is a surprisingly ideal place (to) study past solar activity due to the cataclysmic event that formed the Earth-Moon system,” said Avallone in her essay, A Lunar Time Machine: Secrets to our Sun’s Active Past. “The lack of a thick atmosphere causes solar eruptions that reach the Moon to strip material from its surface, leaving behind an imprint that can be used to understand the Sun’s tumultuous past.”

Avallone’s award is based on the article, “Was the Sun a Slow Rotator? – Sodium and Potassium Constraints from the Lunar Regolith” (Prabal Saxena, Rosemary M. Killen, et al.), published in June 2019. The AAS grants prizes to outstanding science writing in various astronomical disciplines each year. In addition, Avallone’s writing prompted James Paul Mason, AAS/Solar Physics Division Popular Media Award Committee Chair to note, “You’ve even inspired us to consider creating a whole new category of the award, something along the lines of ‘students writing for students’. It’s great work you’re doing.”

The study compared the amount of sodium and potassium on the Moon and the Earth. Models show that the faster the Sun rotates, the more of these elements are lost due to increased solar activity, or coronal mass ejections. Moon rocks have significantly less of these elements compared to Earth, which has a thicker atmosphere and a magnetic field, allowing our planet to hold on to the elements during energetic outbursts from the Sun.

The Earth and Moon have similar compositions, according to a widely accepted theory that the Moon was born from Earth after a cataclysmic collision with a Mars-sized planet called Theia. Since sodium and potassium are more abundant on present day Earth, the authors conclude that the early Sun was a slowly rotating star, completing one revolution every 10 Earth-days. Today, the rotation of the Sun is even slower, taking a placid 27 days.

Besides contributing more information on the evolution of our solar system, understanding the causes and frequency of the Sun’s eruptive events can further augment predictive capabilities for our planet’s safety.