In a YouTube video posted by Professor of Music, Arts and Humanities Peter Frary the band is heard playing “The Sound of Silence” by Paul Simon, a part of a set they were building for the end of semester Pau Hana show.

“[The] students worked so hard I thought they deserved an audience,” Grace said. “I told them a YouTube video was their best opportunity at this time. It was March 12, the last day of class before spring break. We were expecting two more months of rehearsal but realized it was now or never.”

After spring break, they were directed to conduct ʻukulele ensembles online, however, it was not possible to synchronize the sounds from a dozen instruments on Zoom. The resulting sound was a hilarious jumbo of notes, similar to a backstage of warmup of unrelated musicians.

The Frarys and students then switched to working on solos, a format that lends itself to individual coaching. Students uploaded videos of their final projects to Laulima, creating a successful virtual final concert.

The students joked that the impromptu recording was reminiscent of the band’s final performance as the Titanic sank in the cold Atlantic. However, Grace saw this performance as a glimmer of hope and beauty achieved at the 11th hour—the Leeward Coast Ukulele Band playing “The Sound of Silence.” 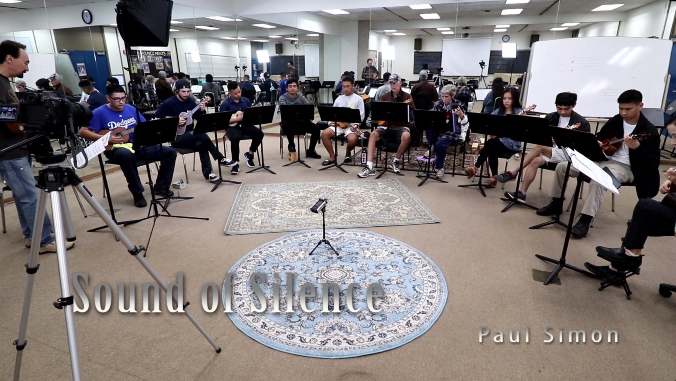