The Regents’ Medal for Excellence in Research is awarded by the University of Hawaiʻi Board of Regents in recognition of scholarly contributions that expand the boundaries of knowledge and enrich the lives of students and the community. 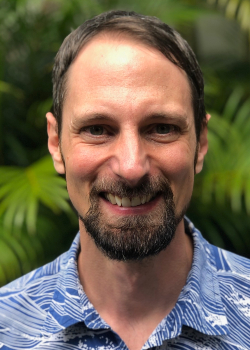 Daniel Huber is an assistant astronomer at the University of Hawaiʻi at Mānoa Institute for Astronomy. He joined UH in 2017, following positions at NASA‘s Ames Research Center in Silicon Valley and the University of Sydney, Australia.

Huber is a world leader in the study of stars and exoplanets, combining data from NASA space missions with observations using ground-based telescopes in Hawaiʻi. He has been an author on more than 200 peer-reviewed publications and was included in the 2019 Highly Cited Researchers list by Web of Science, which recognizes the world’s most influential researchers with multiple highly-cited papers that rank in the top 1 percent by citations.

Since arriving at UH Mānoa, Huber has been the principal investigator on 12 extramural grants totaling more than $1.6 million of research funding, and has advised two postdoctoral researchers as well as 10 graduate students. In 2019, Huber was the recipient of the prestigious Sloan Research Fellowship.

Qing Li is a professor in the Department of Molecular Biosciences and Bioengineering in the College of Tropical Agriculture and Human Resources at UH Mānoa. Li’s research addresses fundamental issues in agricultural chemistry and has greatly advanced understanding of the field.

He has maintained an active research program that has been supported with $19 million in extramural grants in the past 24 years. His work has resulted in about 400 peer-reviewed publications and 20 patent applications and technology disclosures.

As of February 2020, Li is ranked as the 4th most prolific author in the UH system in SciFinder. His scholarship has been recognized by numerous awards such as the American Chemical Society AGRO Award for Innovation in Chemistry of Agriculture and AGRO International Award for Research in Agrochemicals. He has served as associate editor for the Journal of Agricultural and Food Chemistry since 2015. He has mentored many students, fellows, junior researchers and visiting scientists who serve in leadership positions around the world.

Mari Yoshihara is professor and chair in the Department of American Studies in UH Mānoa’s College of Arts and Humanities. She is a scholar and writer specializing in U.S. cultural history, U.S.-Asia relations, Asian American studies, women’s/gender/sexuality studies, literary and cultural studies.

Much of her scholarship examines the politics of cultural encounters between the United States and East Asia, especially how the relations of race, gender, sexuality and class shape the dynamics of those encounters and how they are expressed through cultural practices and representations. She is the author of Embracing the East: White Women and American Orientalism, Musicians from a Different Shore: Asians and Asian Americans in Classical Music and Dearest Lenny: Letters from Japan and the Making of the World Maestro.

Yoshihara played a leading role in bringing American Quarterly, the journal of the American Studies Association, to UH Mānoa and has served as editor since 2014.