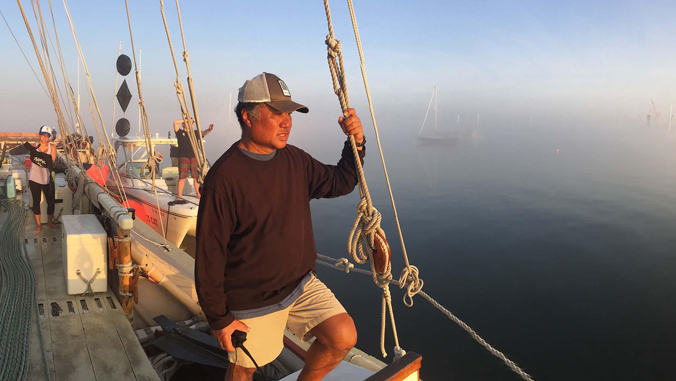 When it comes to the world’s indigenous practices of wayfinding and voyaging, there is a lack of critical, ongoing documentation of this specialized knowledge, resulting in misunderstanding and even misrepresentation of these discoveries and concepts, according to a recently published study in the Journal of Documentation.

That was the finding of a research team led by Wayne Buente, an associate professor in the School of Communications in the University of Hawaiʻi at Mānoa’s College of Social Sciences and Chad Kālepa Baybayan, navigator-in-residence at UH Hilo’s ʻImiloa Astronomy Center.

The researchers confirmed previous findings that publications on indigenous practices of non-instrumental wayfinding and voyaging of Pacific Islanders were often ignored in widely used indexes such as the Dewey Decimal Classification in libraries, the Library of Congress and the Web of Science citation database.

Buente said a relatively simple solution to this would be assigning unique subject qualifiers to distinguish among various contexts in which this concept is used.

Added Baybayan, “It would greatly benefit the academic community, especially those doing research in traditional wayfinding and the voyaging arts if a more complete system was used to index their databases.”

Buente said the researchers will continue working with indigenous communities “to advocate for the fair and equal representation of cultural knowledge and its practice.”

More on the researchers

Buente serves as graduate chair in the School of Communications. He has pursued research projects that examine issues relating to information systems, digital inequality, social media and health disparities. He teaches classes that look at the interplay between society and information and communication technologies.

Baybayan is the highly respected captain and navigator of Hawaiian deep-sea voyaging canoes that include Hōkūleʻa. He holds a bachelor’s degree from Ka Haka ʻUla O Keʻelikōlani College of Hawaiian Language at UH Hilo and a master’s in education from Heritage College. At ʻImiloa Astronomy Center, he delivers outreach programs and coordinates projects with science center partners.