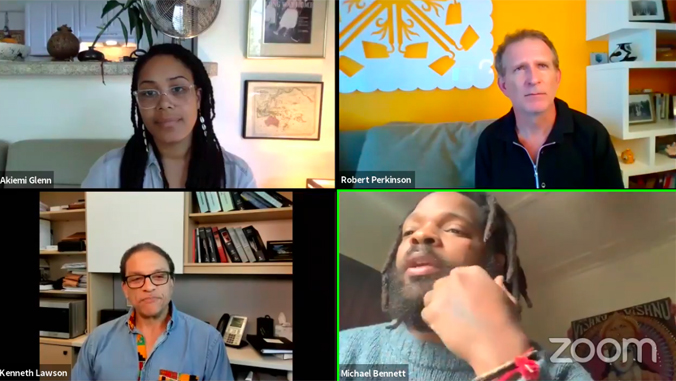 “It’s a longer battle than we really understand,” Michael Bennett said addressing the fight to end racism and the Black Lives Matter movement in the aftermath of George Floyd’s death.

Bennett has a growing connection to UH Mānoa. He co-taught AMST 440 with Perkinson in spring 2020 and served as the spring 2019 commencement speaker, while still an active player in the NFL.

Bennett is also the author of the New York Times bestselling book, Things That Make White People Uncomfortable. He said he felt a need to speak out long before becoming one of the first NFL players who joined in the national anthem protests before games.

“My first reaction was just as a human being, what is it that I see when I see a person losing their life and how am I connected to that even though I’m distant and this may not be my relative,” Bennett said. “My experiences being involved visiting families who were suffering from police brutality or suffering from injustices around the world was there was a certain empathy that creates a certain anger towards you.”

As the co-founder of the Bennett Foundation, which promotes health and nutrition in underserved and minority communities, he constantly sees these issues on a daily basis and turns to his spirituality to keep from getting overburdened.

“Bennett is amazing,” Perkinson said. “He’s a star athlete, a Super Bowl champion. He’s also a best-selling author, an activist and a deep thinker on a range of issues, from food justice to Native Hawaiian rights. In the classroom, he’s a compelling, dynamic, thoughtful teacher. The students really liked him.”

Joining Bennett on the panel were Akiemi Glenn, a UH Mānoa PhD and MA in linguistics graduate, and the founder and executive director of the Pōpolo Project; and Ken Lawson, William S. Richardson School of Law faculty specialist and co-director of the Hawaiʻi Innocence Project.