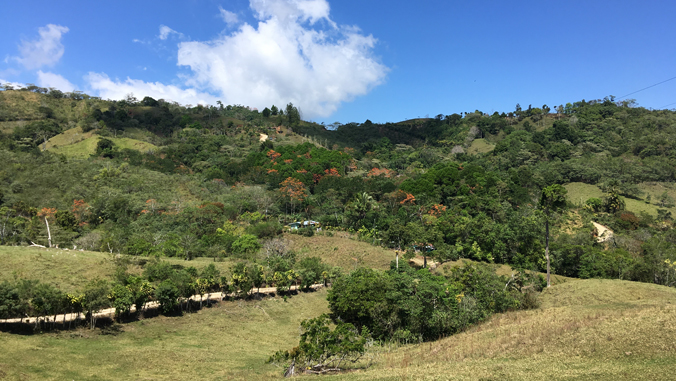 A tropical forest recovery project that started more than 15 years ago is getting a large boost. The National Science Foundation (NSF) is providing $247,000 in funding to the University of Hawaiʻi at Mānoa to support further research in Costa Rica for a project called “Spatial and temporal patterns of secondary tropical forest succession.”

The award will fund a PhD student based at UH Mānoa to conduct research, a post-doctoral research scholar to assist with data analysis of long-term data sets collected over the years and a research-capable drone with a variety of sensors to remotely monitor forest recovery.

According to project researcher Zak (Rakan) Zahawi, who is also Lyon Arboretum director and a botany faculty member, the project began in 2004 when he was based in Costa Rica. Zahawi continues the work with collaborator Karen Holl, a University of California, Santa Cruz (UCSC) environmental studies professor. Holl is also receiving an additional $323,000 from NSF to fund a PhD position at UCSC and cover operational costs in Costa Rica. Zahawi said this is the fourth NSF grant the project has received.

“This is the longest running continuous project on tropical forest recovery in the tropics that we know of, and dozens of undergraduate and graduate students have participated in some capacity with this project, including three PhD dissertations that have been entirely based on the framework of this project,” Zahawi said.

Zahawi said the research is focused on the ability of forests in Costa Rica to naturally recover and to look at ways to accelerate these processes. From 2004–06, 12 sites were treated with three types of human intervention, low (removing disturbances; no planting), intermediate (planting tree islands) and high (planting entire plots with trees). Zahawi said results to date have signaled rapidly changing differences in recovery among treatments.

With new funding, Zahawi said his team will do an intensive survey of all new tree recruits, create a detailed map of forest cover and focal species of mother trees surrounding the sites, and conduct seed dispersal and direct seeding measurements. Researchers will also monitor planted tree growth and natural recruitment in permanent sampling plots.

Zahawi said restoration in Hawaiʻi and the neotropics, where Costa Rica is located, is very different. Research in Central and South America, and the Caribbean focus largely on the resilience of a particular system, or its natural ability to bounce back from a disturbance. In Hawaiʻi, that is not possible due to the major disruption of systems with invasive species and the extinction of many native species.

“Far more aggressive restoration efforts are needed in Hawaiʻi to get native systems back to a state they resembled previously,” Zahawi said.