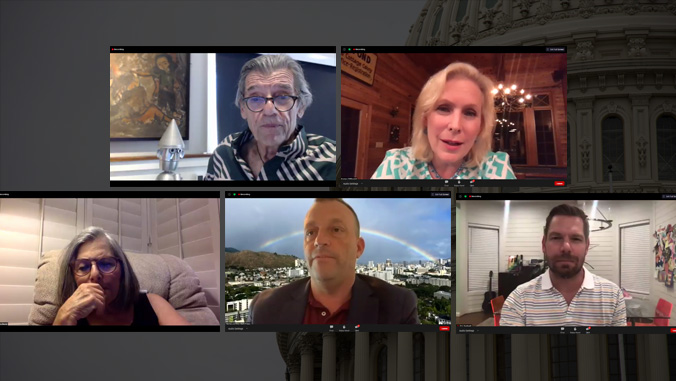 Ethical challenges amid COVID-19, compulsory voting, money in elections and dishonesty in politics.

Ethics in Politics, moderated by former securities executive, part-time Hawaiʻi-resident and University of Hawaiʻi at Mānoa lecturer Will K. Weinstein, drew approximately 500 viewers. It was the last of seven workshops in the 2020 Will Weinstein Ethics Conversation Series, sponsored by UH Mānoa’s Shidler College of Business and William S. Richardson School of Law. For the past 17 years, Weinstein has opened his ethics classes to the general public for lively and fascinating discussions on current ethical issues and dilemmas facing the world.

Weinstein opened the conversation asking each panelist to describe the biggest ethical challenge they are facing. Green, who is also an emergency physician, said he faces an ethical dilemma right now in determining the state’s response as Hawaiʻi experiences a surge in COVID-19 cases.

“It’s so rare we deal with life and death. A lot of times it’s head-to-head combat politically,” Green said. “But there is some life and death and I’m cognizant of the fact that the decisions that we are likely going to make are going to have very harsh consequences for those who have often suffered the most to save the many and it’s really hard.”

Boxer said that ethical challenges are being raised constantly in the U.S. with COVID-19, jobs and racial injustice.

Gillibrand said her biggest challenge is trying to convince colleagues across the aisle to help those in need. One example she gave was the current attempt to pass a COVID-19 relief package for cities and states to fund homeless shelters, domestic violence shelters and food banks.

“My biggest ethical dilemma right now is how to deal with this lack of empathy and this lack of care at a time when families are struggling so significantly,” Gillibrand said.

Swalwell agreed with Gillibrand’s take on the COVID-19 relief package and emphasized a larger question of, “What are you willing to give up to help those in need?”

“Are you willing to lose your job to do what’s right?” Swalwell said.

“It was a real pleasure to be able to introduce the university community to some really dedicated agents of change,” Weinstein said. “Our class had really insightful and thoughtful questions relevant to Ethics in Politics and I think and hope that many of them were answered. Wrapping up our seventeenth year was fun and gratifying. Our students were engaged and made the Zoom experience really easy and enjoyable.”