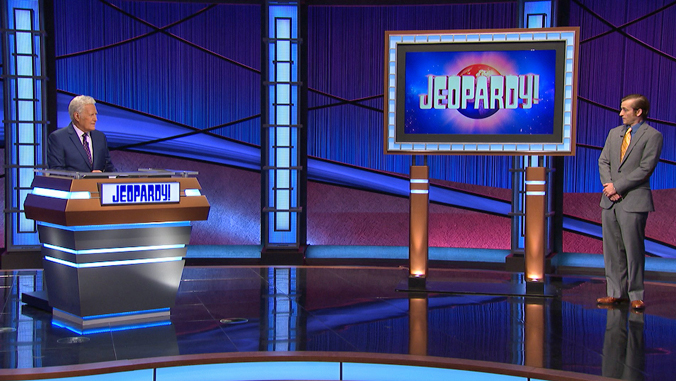 University of Hawaiʻi at Mānoa alumnus Jeff Rich has checked off a big bucket list item. Rich, who earned a PhD in astronomy in 2012 will appear on the season premiere of hit TV game show Jeopardy! on Monday, September 14. From tricky “daily doubles” to signature answers such as “What is…,” Rich said the pre-taped episode was every bit as exciting as he had hoped but also set off major jitters.

“I was in the first group of contestants for the day so I felt extra nervous right up until the taping started, then everything feels like it happens really quickly! During the prep for the show they warn you that the taping goes quickly, and they weren’t kidding,” he said.

Non-disclosure agreements prohibit Rich from revealing any details, however he’s more than happy to dish on one of the main highlights, meeting the show’s legendary host Alex Trebek.

“It was overwhelming to participate and to see someone I’d watched on TV so many times for so long, but he was a nice guy. Alex even complimented my tie when we took our photo together, I’ll probably remember that better than anything else about the whole experience,” Rich said.

The show is taped in Los Angeles where Rich works as an outreach coordinator at Carnegie Observatories, an astronomy research institute. He’s actually the second Jeopardy! contestant out of the UH Mānoa Institute for Astronomy (IfA). In 2001, IfA Physics and Astronomy Instructor Mike Nassir won second place.