Neutron-1, a small satellite involving more than 100 University of Hawaiʻi students, faculty, staff and volunteers, will be launched on October 1 on the ELaNa 31, NG-14 International Space Station (ISS) resupply mission from NASA’s Wallops Flight Facility in Virginia. During the mission, Neutron-1 will measure neutrons in space and radiation coming from the Sun.

The science mission was proposed in 2011 by Peter Englert, a Hawaiʻi Institute of Geophysics and Planetology (HIGP) researcher and principal investigator for the Neutron-1 Mission, and Lloyd French, Hawaiʻi Space Flight Laboratory (HSFL) researcher and project manager for the Neutron-1 Mission, to study neutrons in orbit. It was accepted in 2012 by NASA‘s CubeSat Launch Initiative. 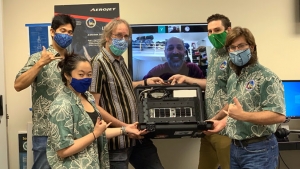 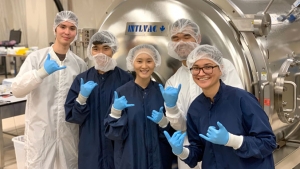 “Neutron-1 is a 3U CubeSat [small satellite],” said Amber Imai-Hong, an avionics engineer at HSFL and ground station coordinator for the Neutron-1 mission. “It’s approximately the size of a loaf of bread and the data gathered by the satellite will be used to understand the relationship between the Earth and the Sun by mapping neutrons in the low-earth orbit.”

Designed by UH Mānoa’s HSFL team, Neutron-1 went through a vigorous proto-flight environmental testing process. Undergraduate students from departments such as mechanical engineering, electrical engineering, computer science and more gained first-hand experience in aerospace research with the design and testing of a spacecraft.

“Neutron-1 will demonstrate that the Hawaiʻi Space Flight Lab has the ability to design, test and launch and operate small satellites,” said Imai-Hong. “We’re hoping that Neutron-1 is able to operate in space and that we can prove to the aerospace community that UH is a great place to do aerospace research.”

Neutron-1 is launching on a rideshare mission, which includes other satellites, and will be in space for approximately one year. UH delivered the small satellite to NanoRacks, LLC in Houston, Texas on August 20. 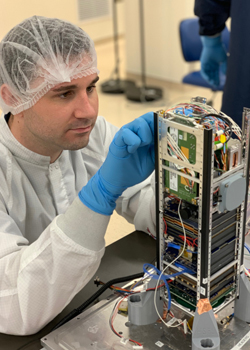 When astronauts set up the deployer pod for launch out of the ISS around mid-November, HSFL will continue to be the primary driver for the Neutron-1 mission.

“We expect it to be ejected from the ISS in mid-November, from that day on it will take no more than a few hours for the satellite to pass over Hawaiʻi and that’s when we should expect the first contact with the satellite,” said Miguel Nunes, an assistant faculty at HIGP, deputy director of HSFL, systems engineer and assistant project manager for the Neutron-1 mission.

HSFL will control Neutron-1 via the GlobalStar network, and partner with amateur radio operators to communicate with the satellite through HSFL’s Kauaʻi CC ground station. Researchers are currently upgrading and fixing the ground station to prepare for when the satellite passes over Hawaiʻi. This will allow amateur operators from the community to send and receive data from the satellite while it is in space for the next year.

Helping prepare for future missions to the Moon

For the electronics inside Neutron-1, UH collaborated with ASU on the payload. Neutron-1 will provide prolonged exposure to the space environment for technology evaluation and serve as a test platform for ASU‘s payload.

ASU‘s payload instrument is scheduled to fly on the LunaH-Map Mission to the Moon. The LunaH-Map mission is a miniaturized, fully functional interplanetary spacecraft the size of a shoebox, that will map hydrogen enrichments within permanently shadowed regions of the Moon’s south pole. This will be the first CubeSat mission to the Moon.

“Neutron-1 will be collecting neutrons in space and this [technology] will allow us to understand if there’s water in the moon in the future,” said Nunes. “So that’s one of the most interesting aspects of this mission.”

The Neutron-1 mission was primarily supported and funded by the Hawaiʻi Space Grant Consortium. Other organizations contributed via funded research projects with HSFL. See HSFL’s website for more information on the mission and names of students and staff involved in the project.

The launch is scheduled for Thursday, October 1, 3:38 p.m. HST and will be live on NASA TV. 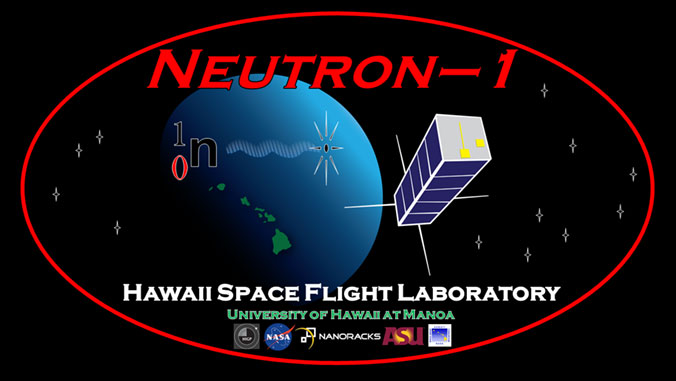