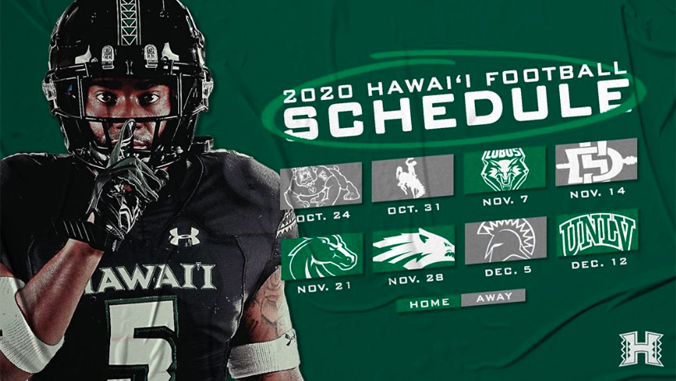 The University of Hawaiʻi football team’s modified 2020 schedule was announced and it features an eight-game, Mountain West (MW) Conference-only slate. The schedule, which includes four home games at Aloha Stadium and four on the road, is subject to approval from state, county and local officials.

The Rainbow Warriors open the season with back-to-back road games against Fresno State and Wyoming on October 24 and October 31. UH comes back to Hawaiʻi for its home opener against New Mexico on November 7 before heading to California to face San Diego State on November 14.

UH returns to Aloha Stadium for back-to-back home games beginning with a rematch of the 2019 MW championship game against Boise State on November 21 and Nevada on November 28. The Rainbow Warriors’ final road contest is December 5 at San Jose State before ending the regular season at home on December 12 versus UNLV.

Unlike past years, the MW championship game on December 19 will feature the top two teams with the highest conference winning percentage instead of the top teams from each division.

The conference partnered with Quest Diagnostics to implement testing protocols across all member institutions. The agreement includes frequent testing with rapid results. The conference will require all football student-athletes, coaches, trainers and other individuals who are on the field for all games to undergo testing three times per week. Test results must be completed and recorded prior to each game.

Football is the only UH sport that participates in the MW. The remaining sports compete in the Big West Conference. No decision on a return to fall athletics for the Big West has been announced.