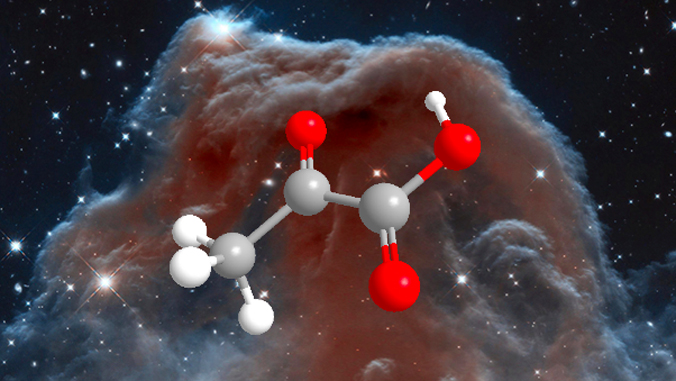 Pyruvic acid—a key molecule involved in the synthesis of compounds such as amino acids (often referred to as the “building blocks of life”)—can be produced in deep space, according to researchers at the University of Hawaiʻi at Mānoa Department of Chemistry’s W.M. Keck Research Laboratory in Astrochemistry and the Justus Liebig University Giessen in Germany.

One of the key questions in the origins of life is how life could have emerged on Earth, and what chemical compounds and key reactions were involved. Terrestrial biomolecules such as DNA and RNA were formed from simple molecular building blocks, but conditions on early Earth might not have been favorable for an original formation of pyruvic acid. However, pyruvic acid could have been abiotically (absence of life) formed in space in low temperature ices by interaction with energetic cosmic rays and survive delivery to Earth via meteorites or comets.

The teams replicated the harsh conditions of deep space within ices on interstellar nanoparticles (low temperature, intense radiation environment) in the laboratory with an ultra-high vacuum setup, and identified pyruvic acid along with its higher energy enol (an organic compound that contains a hydroxyl group bonded to a carbon atom) isomer using laser techniques.

Results also revealed a key reaction pathway for the formation of pyruvic acid through reactions in interstellar ices in cold molecular clouds such as the Taurus Molecular Cloud and star forming regions such as the Orion Molecular Cloud complex, therefore, offering a unique entry point to abiotic organic synthesis in deep space. Once pyruvic acid forms within interstellar ices, these biomolecules can be at least partly incorporated into materials for planetoids, asteroids and comets in star forming regions—the birthplaces of planetary systems like our own.

Extraterrestrial pyruvic acid has been detected in several meteoritic samples. Therefore, organic molecules such as pyruvic acid formed in molecular clouds could have been delivered to Earth.

“Since recent studies have also demonstrated the facile formation of biorelevant phosphorus compounds such as diphosphates and glycerol phosphates along with amino acids, dipeptides and sugars in interstellar ices, it is logical to foresee that nucleosides and nucleotides—the building blocks of RNA and DNA implicated in the replication of living organisms—are also formed in deep space,” Kaiser said.

Researchers hope to recreate these fundamental chemical building blocks in interstellar ices in the future.